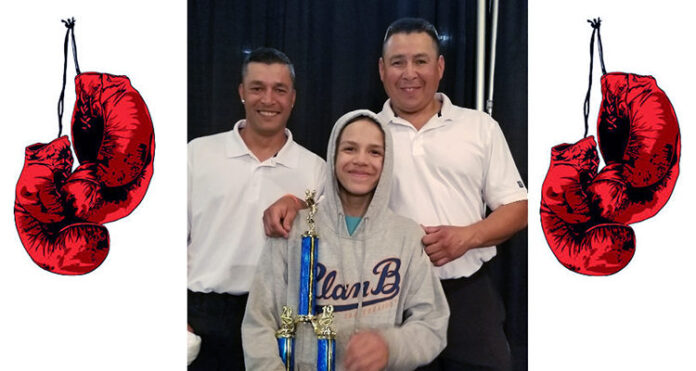 Only 12 years old, but already a seasoned fighter, Jace Derocher of Meadow Lake recently won the biggest match of his young career.

On June 15 Derocher competed in a Pro-Am boxing card in Saskatoon that was televised on Shaw’s pay-per-view.

“It was a real big event with amateur boxers and a couple of professional ones and I won my biggest trophy there,” Derocher said afterward. “I beat a guy from Prince Albert – it was my 11th fight so far.”

Prior to the event Derocher had to lose four pounds in the week leading up to the match to make his 43-kilogram weight class.

“I did a lot of sweating and only ate meat, vegetables and fruits,” he said. “When I got weighed the morning of the fight I had lost six pounds, so I was happy. I stayed away from sugars and bread products.”

One of his coaches, a former boxer, Tyson Bear, noted this is Derocher’s fifth season with the Flying Dust Boxing Club where training happens three times per week. There’s a lot of skipping, leg work and sparring.

“Jace really stepped up his game in this last fight,” Bear said. “They’re three, one-minute rounds and Jace dropped his opponent in the first round, but they continued on for the full three. Now that he has more than 10 fights under him, he’s no longer a novice, he can now compete in the open division.”

Earlier this year, Bear and fellow coach Lawrence Sinclair, also a former boxer, took athletes to Calgary and Lloydminster for competitions with strong showings at both.

“Our goal here is to develop young boxers, no matter their age,” he said. “We have a small group, and some are competitive boxers and some just come out who want to learn the sport and get in a lot of exercise.”

Derocher plans on continuing his boxing career to at least age 16, then after that he’ll decide what to do next.

“I’m having a lot of fun right now,” he said “I get to travel to different places, meet new people and it’s exhilarating. When I first get into the ring my opponent doesn’t know what I’m going to do and I also don’t know what he’s going to do – it’s a mystery. Then someone throws a punch, and it’s on.”