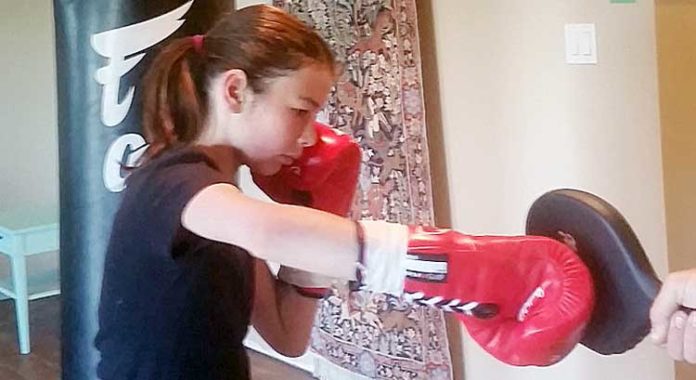 Twelve-year-old Havanna Demers of Rapid View is ready to go the distance.

Demers will have her in-ring debut when the Titan Boxing Club out of Cold Lake, AB hosts a professional/amateur card at the Cold Lake Energy Centre June 25.

“Cold Lake always puts on some of the best boxing cards in western Canada,” remarked Demers’ father, Quenten Demers. “This is a pretty big deal because it will feature VIP tables, and it will have a whole dinner show atmosphere with lights, music, the type of thing you won’t see at a typical boxing event.”

Havanna Demers, meanwhile, has been training since she was seven years old.

“At first, my sister was doing kickboxing in Meadow Lake and I also wanted to join,” she said. “My dad ended up training me in boxing and a little but of kickboxing, and I’ve stuck with it ever since. I like boxing better than kickboxing, and here I am.”

Quenten Demers said both he and his daughter have a strong relationship with the boxing club in Cold Lake.

“We’ve put in sparring rounds with their fighters for a few years now, so they’re aware of Havanna’s skill set and abilities,” he noted. “She has been boxing for six years, so she has a lot of experience. But, she just doesn’t have a lot of fight experience. When the opportunity to take part came up, we talked it over and decided to give it a go. The club is very excited to have her on their card.”

At this time, Demers’ opponent has not been announced.

“We’re not sure who her opponent is yet, but it sounds as though they have someone lined up,” Quenten Demers said. “Either way, I don’t want her to worry about anything. Nothing is ever 100 per cent in the sport of boxing, but we’ve started a training regime so she is learning not only what it takes to make it in the sport, but also to be in peak shape for the event.”

When contacted by Northern Pride, Havanna Demers had just completed a four-kilometre run.

“She does that every morning, then, at lunch, does a 20-minute kettle bell routine and, five times a week in the evening, she boxes for two hours – 10 rounds on the heavy bag, six rounds skipping, 10 rounds shadow boxing and a few rounds on the coach’s mitt, and sparring whenever she can. This is in addition to all the calisthenics (strength training). She is learning not only how to box but how to box competitively.”

As for what she’s looking forward to most come June 25, Havanna Demers said she has one goal in mind.

“I do want to win,” she said. “I’m very excited and I fairly confident in myself as well.”

And, for anyone else interested in taking up the sport of boxing locally, Quenten Demers encourages them to reach out to him at any time.

“We have a gym set up in our basement, we have everything needed to train, we do private lessons and more,” he said. “I am a multi-time, multi-weight class provincial and Golden Glove champion, I fought a Commonwealth champion and a few Olympians including an Olympic medalist, so I have the experience.”

He also said he is not looking for any “easy roads” in terms of his daughter’s future success.

“We’ve registered her with the Alberta Boxing Association, which has much more competition than its Saskatchewan counterpart,” Quenten Demers stated. “We’re hoping she will have better competition, which will make her a better fighter in the long run. You always learn more from your losses, so we’re looking forward to the day she finds someone to show her around the ropes.”

In the meantime, Demers is looking for sponsorship prior to her June 25 fight.