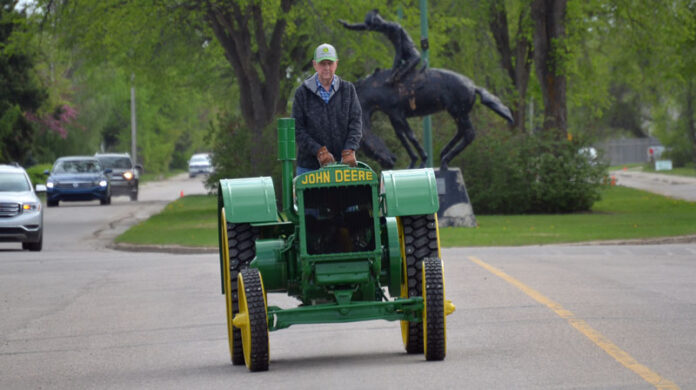 That’s what Meadow Lake resident Ken Skotheim had to say about the chance to relive his past Sunday afternoon (May 31) when his son-in-law, Shawn Pevach, delivered to the 83-year-old his family’s original farm tractor, fully restored and in full working order.

“Our grandpa – my mother’s dad – farmed with this tractor in Outlook country, but after a while he had no more use for it and he brought it up to our family farm near Prince Albert,” Skotheim explained. “We used it to break 40 acres of land, as well as for a few other things. That’s when I had a chance to drive it. I was about 14 years old at the time. My brother, Harvey, was two years older and he did a lot with it too.”

Years later, the tractor – a 1930 John Deere D – was placed in a shelter belt at the Skotheim farm where is sat nearly forgotten for decades.

“As you could imagine, the trees all grew up through it and everything else,” Skotheim continued. “A few years ago, however, we (Skotheim and his family) got talking about it. Shawn was there, and he has (forestry) machinery. So, we managed to get in there, and he cleaned it all out, loaded it up and hauled it away. He took it to his place in Bonnyville and had it sitting in the yard as a sort of ornament. It was in pretty bad shape, but he eventually found a guy to fix it up.”

That “guy” was Garth Crooks of Bonnyville.

“I’m glad Garth was able to restore this old tractor,” Pevach told Northern Pride while en route to Meadow Lake from Bonnyville to deliver the gift Sunday. “He (Skotheim) hasn’t driven it for years, and it will be a memorable way to help him celebrate his recent birthday.”

Skotheim said he hadn’t been on the tractor since the 1950s.

“It was awesome,” he said following his Sunday drive that took him from his 1st Street West home, through downtown Meadow Lake, to the local RCMP detachment and back again. “That tractor is only 16 horsepower, but, boy, you can’t believe how it’s geared up… I work at the RCMP detachment as a guard, so I had to go over there and show it off. They appreciate old stuff like that.”

Skotheim has lived in the Meadow Lake area since 1966.

“I moved off the farm, started in construction a little bit and got a job with the propane company here,” he noted.

As for the tractor, Skotheim said it will return to Bonnyville with Pevach and Skotheim’s daughter, Sonia.

“They have a good place for it,” he said. “They have a building they can keep it in and all the family can go there any time they want. But, it really brought back memories to drive it again and I really enjoyed this trip around the block.”