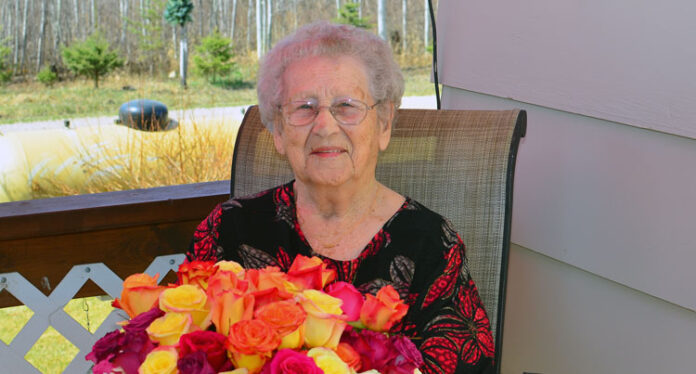 Yablonski, who grew up near Craven, SK, moved to the Cabana district southeast of Meadow Lake with her husband, Frank, and today – 76 years later – she still considers the farm home.

“I met my husband at a dance in Regina while he was in the army,” Yablonski recalled. “He was from here, so – when we were married – we came back to this area. I have lived here on this farm for 76 years.”

Frank Yablonski passed away in 2005, but the couple had five children together, including daughter, Helen, who now lives with her mother.

“I look after myself more than she looks after me,” Yablonski laughed.

Yablonski also said, over the course of 100 years, she has experienced and witnessed much, including a century filled with innovations of all size, shape and form.

“There’s been lots of changes, but I can’t remember them all,” she said. “For years we were burning a kerosene lamp (for light), but I don’t remember exactly when we got power here at the farm – maybe the early 1960s. We were also pretty well the last ones around here to get a telephone.”

Another change Yablonski recalls is how much more wind there is in her neck of the woods compared to years gone by.

“There was no wind when I first got here – we had a lot of trees, and no wind,” she said. “Around Craven it was windy country, and it’s been like that here now too for a long time.”

As for why she chooses to remain at home when other seniors her age and even younger now live in long-term care facilities or senior-centric buildings, Yablonski said the answer is simple.

“It’s because I’m too damn active,” she said. “In fact, if I had good knees I would be up here (on the outdoor deck) dancing.”

In addition to spending time with family, Yablonski enjoys quilting, crocheting and other hobby work.

“They (family) also kept me busy – cooking, working, you name it,” she said. “I was still washing people’s clothes at age 90. I also liked gardening and I still raise plants.”

by Phil Ambroziak
With files from Terry Villeneuve