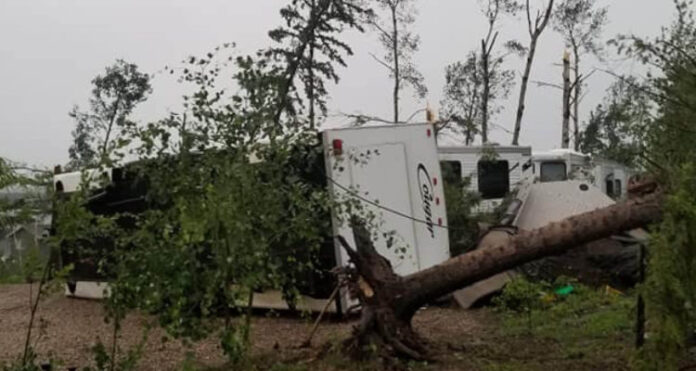 Those are the words of an eyewitness of the tornado that touched down at Murray Doell campground at Lac Des Isles in the Meadow Lake Provincial Park and Lauman’s Landing near the community of Goodsoil late this afternoon.  Fatalities have been reported on social media, but are not confirmed by any official source.

Barry Butler has a cottage at Lauman’s Landing, some seven kilometres north of Goodsoil. “We took family out there this afternoon because my nephew just bought a lot around the corner from us,” Butler said. “I took one look up above and said this doesn’t look good. We raced to our car and it hadn’t even started to rain yet, and before we got to the car, trees started coming down all around us. That was at 4:46.”

Lauman’s Landing, is a permanent subdivision of about 198 cottages just seven kilometres north of Goodsoil.

“You wouldn’t even recognize this resort now. It looks like a bomb went off,” Butler added. “I’d say 90 per cent of the lots have anywhere from a little to major damage. I have a friend who completely lost two trailers and his boat. I have another friend who has a beautiful brand new home and I noticed all his shingles are off and looks like a part of his roof is missing too.” As Butler and his family were driving out of the cottage area, he could see thousands of trees were down. He hopes to get word soon about his friends and neighbours.

Melissa Kuzior, who was at The Shores, another resort village on Lac des Iles’ south shore, watched the storm roll in. She said the storm came in quickly from across the lake.

“There was a small water tornado, then all of a sudden the lake water was getting sucked up,” she said. “We started running to our vehicle when the wind picked up and we could see trees coming crashing down all around us.”

The Village of Goodsoil has opened up their hall to those impacted. STARS ambulance was dispatched to the scene shortly after 5 p.m.

“As I was driving out I met 10-15 emergency vehicles and they had different markings, so they were coming in from a lot of different places,” Butler said. “I heard there were a lot of injuries, and possibly fatalities. There were a lot of people hurt at Lauman’s Landing too. I know I have one friend that was hurt, but I haven’t been able to find out how bad yet. I’m hoping to get a call here soon.”