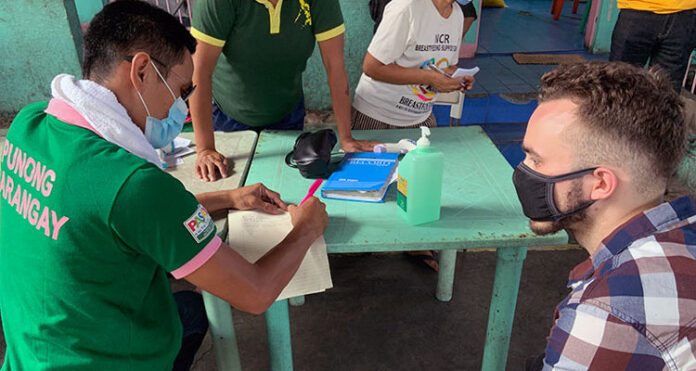 It’s not only the most quotable line from the 1939 classic The Wizard of Oz, it’s also become a point of focus for a Meadow Lake man whose efforts to return to Saskatchewan from a recent visit to the Philippines have gone slightly awry because of the ongoing COVID-19 crisis.

Josh Ramshaw, who travelled overseas to visit his Filipino fiancée, Lou Landero, arrived just after the World Health Organization declared the COVID-19 outbreak a global pandemic March 11, but prior to the implementation of any major travel restrictions. Still, the journey was not without incident and, what happens next, he said, is determined on a day-by-day basis.

“About two weeks before my flight was set to leave for Manila, Philippines, I got an email from my airline stating, due to the coronavirus, they were cancelling all flights through South Korea, so I was forced to re-route through a couple extra stops before I could reach the Philippines,” Ramshaw explained. “On the way there, I had four layovers just to arrive in Manila.”

“When I left, there was some fear, of course, yet I didn’t see anyone wearing masks in Saskatoon,” he said. “When I arrived in Minneapolis and Detroit, I still did not see many people in masks. But, by the time I arrived overseas, I could sense panic and anxiety as about 80 per cent of people were wearing masks, and there were many people coughing. Hand sanitizer had also been placed throughout the airports.”

After his arrival in the Philippines, Ramshaw said a lot changed.

“I arrived March 14 at 9:55 p.m., and, by midnight, the government had cracked down and would not allow any residents of the Philippines to leave the country,” he stated. “It sounded as though they would not send international flights out either, but it turns out they are allowing flights out of the country, just not into the country.”

The City of Manila has been on lockdown since then.

“No taxis are allowed to drive anyone anywhere,” Ramshaw said. “And, that is the livelihood of many people from here. Sidecars carrying people are not allowed either, but many families will starve if they do not, so you still see some sidecars driving people. One driver told us, if he gets caught, he could possibly be sent to jail or receive a large fine. However, he cannot completely stop, as his family lives day-to-day. Some taxi drivers are still working, but not in their taxi vehicles. They are using personal vehicles for fear of being caught and charging larger than normal amounts because of the risk involved.”

Ramshaw went on to say the only businesses currently allowed to be open in Manila are grocery stores, gas stations, and those that also offer essential services.

“However, just like the taxi drivers, you will see some other stores letting people shop, but they are being careful and aware in case there are any police officers in the area,” he noted. “Others have bided by the rules and have closed completely.”

Ramshaw and Landero have been dating for seven months and he said, when originally planning his trip to the Philippines, he never imagined the experience would be anything like it has been.

“There are guards, police officers, and soldiers on mostly every street monitoring people,” he said. “And, there are temperature guns being used to check people’s temperatures before they are allowed inside any essential business.”

Ramshaw was scheduled to leave the Philippines yesterday (March 25). As of this week’s news deadline, however, he was unsure how his return trip would pan out. His travel plans keep changing with the latest including a layover in South Korea, as well as a 28-hour stop in Detroit. He also said, if his original plan had gone ahead, he could have avoided being overseas when the COVID-19 scare was as big as it is now.

“I was supposed to go to the Philippines in January, but had to change it to March for work reasons,” he said. “When I finally do arrive home, I will be in a mandatory two-week self-quarantine to ensure I am not putting anyone at risk. So, a two-week holiday is turning into a full month without work.”