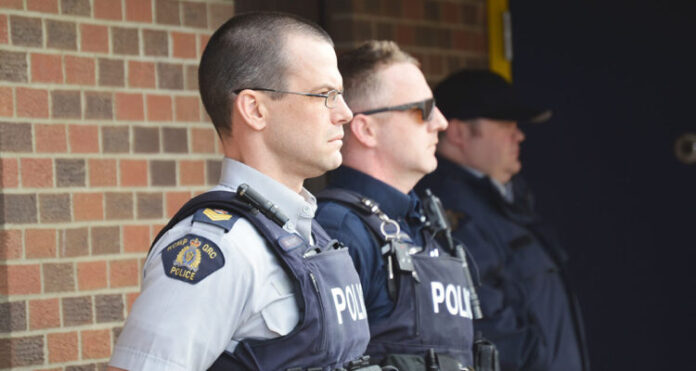 First responders from Meadow Lake took part in a nation-wide showing of solidarity last week for the RCMP member killed in the recent shooting rampage on Canada’s East Coast.

Last Friday (April 24) at 2 p.m. Atlantic time (11 a.m. Saskatchewan time), ambulance services and fire departments across the country honoured the sacrifice made by Cst. Heidi Stevenson by wearing red and observing two minutes of silence outside their respective RCMP detachments. Locally, the first responders lined Railway Avenue directly in front of the detachment with vehicle lights flashing as crews stood at attention.

“The RCMP is a family,” remarked Meadow Lake RCMP Sgt. Stephen Hurst, who emerged from the detachment to take part in the proceedings. “Cst. Stevenson was a member of our family and we honoured her in that way because we are all affected by her loss. We show support to those employees involved or affected by this tragedy in any way we can.”

Hurst went on to say it meant a lot to also have local EMS workers and firefighters on hand.

“It was touching to see the support from fellow emergency services personnel,” he said. “In a time where we are restricted in how we interact or gather, their support is felt through their presence.”

On April 18 and 19, 51-year-old Gabriel Wortman committed multiple shootings and set fires throughout rural Nova Scotia. Twenty-two people – including Cst. Stevenson – died and two others were injured before the RCMP shot and killed Wortman at a gas station in Enfield.

Among those also in attendance at the Meadow Lake ceremony Friday was former Nova Scotia resident Caitlyn Clements. She’s originally from the Portapique, N.S. area, the community where the violent incident began.

“I am really grateful of the support shown from so far away,” Clements said. “Heidi Stevenson died protecting the people I care about and, because I cannot travel due to the pandemic, this was the only memorial I will get to attend.”

Meadow Lake’s Shelley Dymond, who laid flowers outside the local RCMP detachment, was also moved by the support displayed that day.

“These people put their lives on the line every day, whether it be in the face of disease or gun shot wounds,” she said. “They’re doing everything they can to keep us safe and they deserve the respect. This (laying of flowers) is something we wanted to do to pay our respects.”

“It was such a tragic event for the whole country and it’s almost hard to believe the worst mass shooting in Canada’s history has happened in our lifetime,” he said.

The rampage is the deadliest in Canadian history, surpassing the 1989 École Polytechnique massacre in which 15 people were killed. As of this week’s news deadline, authorities have yet to establish an official motive for the killings; however, it is not being considered an act of terrorism, and an investigation is underway.

Meanwhile, because of COVID-19 regulations, the RCMP is unable to conduct a regimental service for Cst. Stevenson at this time.