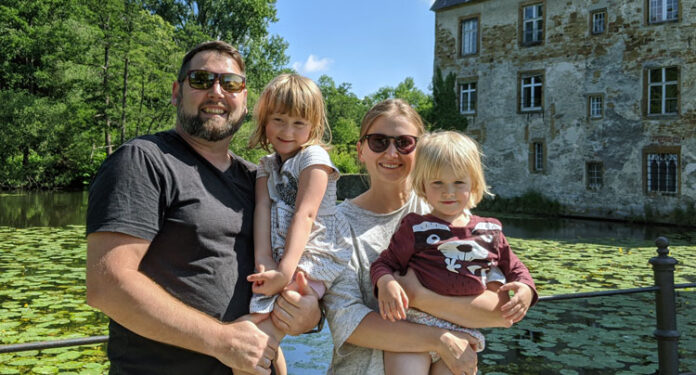 As COVID-19’s grip on the world begins to loosen, a former Meadow Lake resident now residing in Germany shares an international perspective on the pandemic’s global impact.

Mark Dennis – the son of Meadow Lake’s Glenn Dennis Sr. and his wife, Val – lives with his family in the northern part of Germany in a small community south of Hanover. Dennis works as a service technician for a major telecommunications company and said – much like has been the case in the rest of the world – COVID-19 had a tremendous impact on the country he now calls home.

“The region we live in was one of the bigger areas in Germany that was hit,” Dennis told Northern Pride. “There were a lot of COVID-19-related deaths, but more so in the more densely populated communities opposed to where we live. We’re in a small village which is surrounded by three large cities, so our community wasn’t affected as badly as some of these bigger centres.”

As of this week’s news deadline, Germany as a whole had confirmed more than 190,000 cases of COVID-19 of which about 174,000 had recovered. A total of 8,946 deaths related to the virus have been reported to date.

“The overall number of deaths in Germany is similar to that of Canada (which stands at 8,346 as of press time),” Dennis continued. “However, our total population is about three times that of Canada’s – about 83 million people to Canada’s 37 million.”

The good news, Dennis added, is things do appear to be getting better and life is starting to resume somewhat of a sense of normalcy.

“They started opening things up here about a month ago, but people are now required to wear a face mask when they ride public transit or when they go into any of the stores,” he said. “Schools and day care centres opened up about two weeks ago, but as of yesterday (June 18), closed again because of an outbreak at a local meat packing plant.”

Dennis said businesses remain open, but the schools and day care centres were shut down again as a precautionary measure.

“People are not too happy about that because a lot of them are back to work, but now don’t have child care,” he noted. “It’s tough for my wife, Katja, and I because we have two young children and neither of us have family nearby. We don’t have anyone to assist us with child care, but thankfully our employers have been very understanding throughout this entire ordeal.”

He also said the number of COVID-19 cases continue to decrease, which means things should begin to get better for everyone sooner rather than later. He also said, in spite of the major impact COVID-19 had early on in the nearby country of Italy, there was never much concern abut the situation growing as bad in Germany.

“Germany did have a different approach to things in the sense we kept our borders open while all other European countries closed theirs down,” Dennis explained. “It didn’t really matter, though, because Italy was on lockdown and no one from there could come here anyway. Things are looking a lot better now and I am optimistic as we move forward.”

Dennis, a graduate of the U of S, left Canada in 2004 to further his studies in Finland. He lived and worked in that country for six years. He also met his wife, who is originally from St. Petersburg, Russia, while in Finland.

“I’ve done a number of different things since leaving Canada,” he said. “I’ve written finance proposals for the European Union and the Ministry of Foreign Affairs, I’ve worked on regional development projects and, when I moved to Germany, I even worked in the fashion business. Katja works as a textile designer.”

Considering he lives on the other side of the world, Dennis said it isn’t easy for him to come home to Meadow Lake. When he does get here, however, he makes the most of it.

“We were fortunate enough to make it back last summer for a good visit,” he said. “We had plans this summer to visit Russia, but obviously that won’t be happening now. In the meantime, it’s important – no matter where you live – to follow whatever health guidelines are in place, not only for your own safety but for the safety of others as well.”