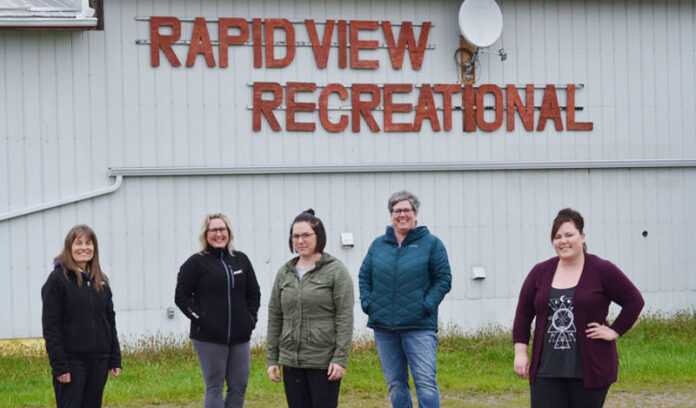 Change is coming to the Rapid View Recreation Centre, but it’s going to be anything but… rapid.

“It’s going to be a long process, but we’re going to stick with it until we achieve our goal,” remarked Stacey Nolin of the Rapid View Program and Development fundraising committee when speaking of that group’s efforts to support a major renovation project at the local community centre.

The fundraising committee has teamed with the community’s recreation board to raise money for the initiative, which will ultimately be divided into several phases.

“The fundraising goal for the first phase is $50,000, and the renovations have been prioritized by immediacy,” Nolin said.
The focus of Phase 1 is to improve drainage around the perimeter of the building, replace most exterior doors, decommission the ice plant (from the former curling rink), install parking lot barriers along the building and replace the boiler.

“We are working together to improve this building for the good of the whole community,” Nolin continued. “The building – which also serves as the gymnasium for Green Acre School – is the hub of the Rapid View community, and that’s why we decided to join forces with the recreation board and figure out what needs to be done to start the process of updating the facility to modern day standards. By doing so, it will increase curb appeal, which, in turn, will hopefully increase the rental side of things while also improving the overall gymnasium facility for the kids. The building is still up to code, it’s just a matter of making it more modern and improving its viability.”

The Rapid View Recreation Centre kitchen and curling rink were built in the 1970s, while the gym/hall was built in 1983. That was also the year the local recreation board was formed. In years prior, it was community members who worked together to build the facility as a means of establishing a local gathering place. The last major upgrade to the gym/hall was done in the 1990s with some minor renovations to the upstairs.

“The building is continually maintained, but our two groups would like to see it modernized and, by recently securing an engineering report, we now have an unbiased opinion on what sort of work can be done, must be done and in what order,” Nolin said.

“Things are in the very preliminary stages, but the plan is to have all this work done with a $50,000 budget,” Nolin said.
A third fundraising event was planned for the spring, but was called off because of COVID-19. However, Nolin said a new fundraiser will be announced soon.

“The renovation plans include making our facility wheelchair accessible, ensuring we have a good, reliable heating system, meeting regulatory health codes, to continue to have the school division rent our facility so our kids continue to have a gym, as well as having a reputable rental building to attract revenue to sustain our facility,” Nolin said. “We do not know the duration of our initiative, but we will persevere one phase at a time to continue to show the importance of keeping our community growing. The community of Rapid View has been very supportive. Our slogan is ‘our community, our responsibility’ and everyone is on board with that statement.”

The Rapid View Program and Development fundraising committee was established in 2009.