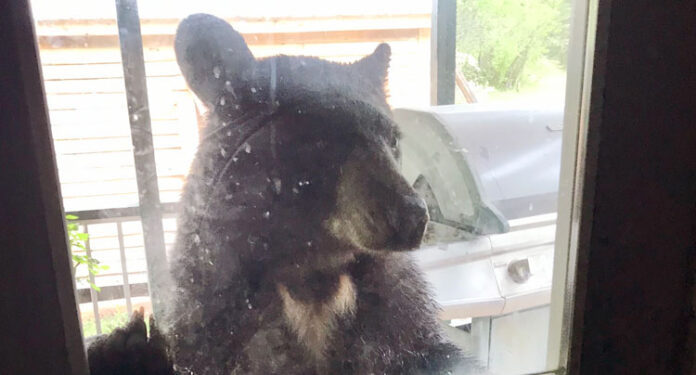 If only wildlife understood the importance of social distancing.

That’s likely what Meadow Lake area resident Robin Roger is thinking after a recent encounter with an unexpected guest at the front door of her Cabana Road home.

Roger was surprised to see a bear sniffing around the barbecue located on her deck and, after hearing the barking dog within the home, the bear began to peer inside the door’s window.

“When I saw the bear on the deck, the first thing I did was lock the door,” Roger said. “The door does have a knob, but I figured I better lock it just in case because weirder things have been known to happen. I also made sure the dog wouldn’t try to go after it and then immediately phoned my father-in-law, Vernon Roger, who lives nearby and who is a lot more used to dealing with wildlife than I am.”

However, right before she placed the call, Vernon Roger had gone outside to check his cattle and didn’t take his phone with him.

“By the time he came back in, saw that I had called and phoned me back, the bear had already run back into the bush,” Robin Roger noted. “I also tried calling my husband, Matthew, to see if he thought I should try shooting the bear. He didn’t answer either, so instead I just yelled at it. It was hanging around the deck for about 10 minutes.”

The family had used the barbecue the night before.

“He (bear) was very interested in the barbecue, Roger said. “He didn’t cause any damage, probably because he was distracted by the dog barking.”

When the animal looked inside the home, Roger said she surprisingly was able to keep her cool.

“I was very calm,” she said. “We had a bear in our yard last year as well. But, this time it was a little closer to home. I wasn’t scared, but probably would have been if the bear had been a little more aggressive.”

“This weekend I plan to get a refresher on riflery because we have livestock here, there’s our dog and we have four children,” Roger stated. “It was not scared at all – that was the most concerning thing about the situation. It just kept looking in the window as I yelled at it.”

According to a spokesperson with the provincial Ministry of Environment, every spring black bears move around to establish new territory and look for food.

“This is normal behaviour for wildlife, especially for younger animals, but it can result in safety issues for humans,” the spokesperson noted. “Bears are ruled by their stomachs. If they cannot find food, they will leave the area.”

Roger recommends people with barbecues to properly clean them after each use.

“I encourage people to be smart and to clean their barbecues,” she said. “Treat it just like the camping rules because the smell of food is on their radar right now. This is something I am much more aware of now than I was before today.”