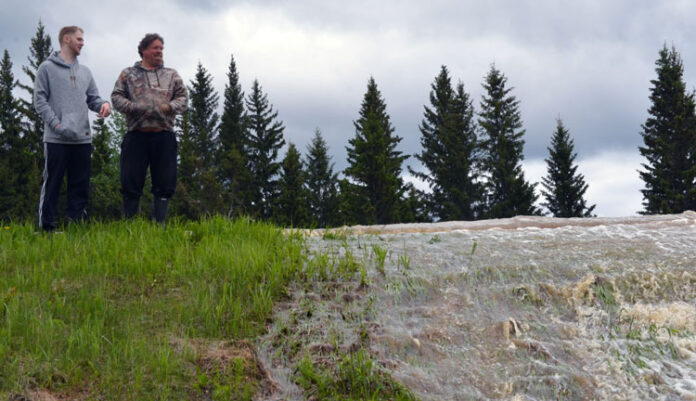 Indeed, the prolonged rainfall recently experienced in Meadow Lake and area did leave earlier this week, but it also took something with it – two major roads in the rural municipality.

“If you go down Cabana Road toward the east, the road is gone,” remarked RM of Meadow Lake chief administrative officer Gina Bernier. “From what I understand, it’s going to be a million-dollar project to fix. We will likely apply for the Provincial Disaster Assistance Program (PDAP) because this is going to be such a challenging project. It’s just unreal.”

Bernier recently met with the RM’s public works manager Shawn Heaver along with the municipality’s EMO coordinator to discuss the recent washout, as well as another such incident on the far end of Rialto Road where high water caused as a result of the recent rainfall resulted in a nearby creek overflowing and overtaking the roadway.

“All this is a result of high water that builds up in waterways to the south,” noted Rialto Road resident Paul Schwab who was on hand to witness the damage firsthand Monday afternoon.

Although Schwab said it’s not uncommon for water in the creek to rise after a heavy rainfall, he doesn’t recall a time when it’s risen as much as it did this week. Bernier agreed, stating the damage caused to both Cabana Road and Rialto Road is unlike anything she has ever seen.

“We’re going to have to contract the (Cabana Road) project out for sure,” Bernier added. “I’ve been with the RM for more than 20 years and I don’t remember anything like this happening before. Rialto Road is holding, but (a portion of) Cabana is gone.”

Residents who live in the area of both washouts still have access to and from their homes via other nearby rural roads.

“In the meantime, all we can do is put up ‘road closed’ signs,” Bernier said. “It’s incredible how much damage can be caused when we have so much rain in such a short period of time.”

“The 30-year average June rainfall is 66.5 millimetres, so Meadow Lake has already passed that in the first week,” Lang said. “As for the forecast for the week, only scattered showers and thundershowers are anticipated until the weekend where another low pressure system may bring some warmer temperatures but also more organized rains along with some wind.”