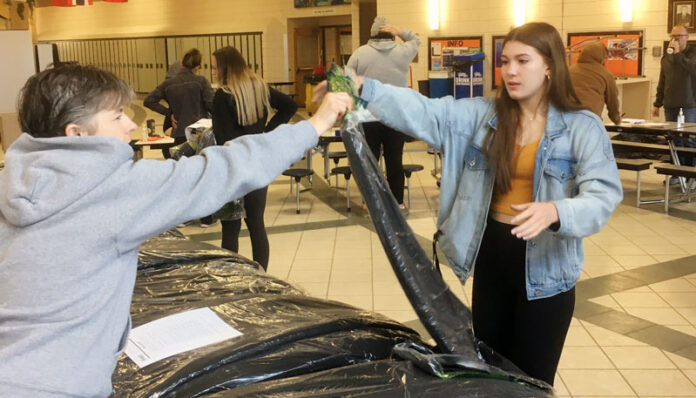 COVID-19 and the social restrictions in place as a result of the virus have caused high school grad season to break from tradition this year.

“With the cancellation of all in-person graduation ceremonies this year, we’ve decided to go with a virtual model,” explained Brad Freyman, principal of Ernie Studer School in Loon Lake. “We’re in the process of having professional photos of each grad taken, and are also recording messages from each grad, as well as from their parents and ESS staff.”

These messages will be compiled and the video released via Facebook and the school’s website Friday, June 5 at 7 p.m., the date and time of when the traditional graduation ceremony would have normally taken place.

“That’s the plan anyway, as there are still a few things we need to work out such as having all the necessary permission forms signed which allows us to post images of the grads on social media,” Freyman continued. “We’re also attempting to organize a sort of drive-thru event where graduates can pull up to the school and be presented with their diplomas from the end of a six-foot stick. We’re still attempting to work out all the details for this, however.”

“We had an online meeting recently and emotions are mixed,” Freyman said. “Some just want to take what they can get and move on while others are still wishing they could have a traditional ceremony. Either way, it tugs at the heartstrings. This is definitely not our first choice when it comes to how we would like to do grad. We’re just trying to make the best of a unique situation.”

The same could be said for Carpenter High School in Meadow Lake where school staff and the local parent grad committee are working together to organize a virtual grad of its own. A professional video is being produced and will be released online June 26.

“Of course it is difficult not to be able to have a normal grad like other classes have had in the past, but the school and the parent grad committee is doing the best it can given the circumstances,” remarked Emma Wilfing, the CHS valedictorian this year. “We’re all trying to make the best of the whole situation.”

The video will include 10 or 20-second clips of each of CHS’ 107 grads thanking the important people in their lives, talking about what they plan to do in the future or sharing a special memory of their time at the school.

“As valedictorian, I will still give a speech, but it will be recorded here at my home,” Wilfing added. “This is something no one has had to experience before, but – at the same time – it’s kind of cool to know we’ll be able to look back on this one day and tell people we graduated during a global pandemic and this is how we were affected.”

Wilfing plans to attend the University of Alberta in the fall.

“They have a Francophone campus there, and I will be taking a five-year program that will earn me both my bachelor of science and bachelor of education,” she said. “I hope to one day teach math and science at the high school level and in a French immersion setting. As for high school grad, there were so many unknowns going into this and the school could have very well cancelled the whole thing. Instead they decided to give us a virtual grad, and I am very grateful to them for doing this for us.”

Goodsoil Central School’s Class of 2020 included 10 graduates this year. The traditional ceremony was originally scheduled for May 22, but instead a video featuring photos of all 10 grads was posted online along with a congratulatory message that also read, “we can’t wait to celebrate with you soon.”

According to Nadine Kope, vice-principal at GCS, a celebration of some sort will happen at some point.

“We do plan to do a few more little things in June, but because the parents of our 10 grads didn’t want to give up on a ceremony, the plans is to hold one in the fall if we are able to by then,” Kope said. “We’re also preparing a proper virtual celebration which we will release at that time if the more traditional ceremony still cannot happen.”

Meanwhile, the Northwest School Division now has a new career and grad coaching resource available for students. The website – created by CHS grad coach Curtis Paylor – can be found at https://portal.nwsd.ca/public/p4zleaa/Pages/defaut.aspx#/=#TakeBackYourYear and includes information on course selection, scholarships, loans, post-secondary education and more.