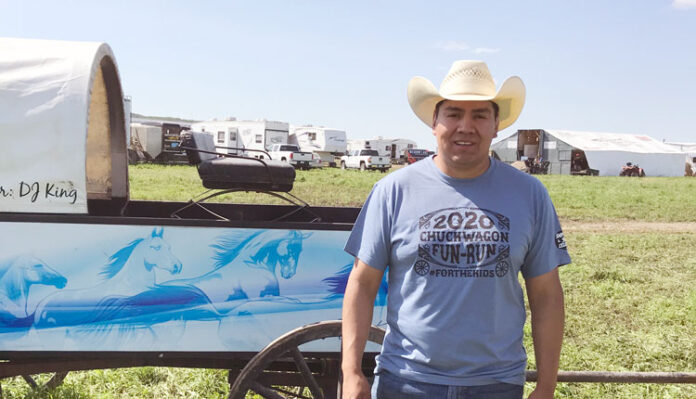 Calvin Fiddler is living his dream.

A Waterhen Lake First Nation member, Fiddler made his debut in the wagon box this past weekend, driving in his first official chuckwagon race as part of the unsanctioned charity fun races held Aug. 1 and 2 on the Poundmaker First Nation.

“It was absolutely everything I expected it would be,” Fiddler told Northern Pride. “I haven’t felt that kind of adrenaline rush in years – I think I’m hooked now.”

Although Fiddler competed in his first race only recently, he has been involved with the sport of chuckwagon racing for the past decade.

“I got involved with the sport about 10 years ago as a barn hand for long-time CPCA driver Ray Mitsuing,” Fiddler continued. “I worked for Ray for three years before moving on to work as a barn hand for Luke Tournier of the WPCA for the next seven years. I learned a lot from Luke. He may not know it, but he was a real mentor to me and, although he didn’t teach me directly, I learned everything I know just by watching him all those years.”

While Fiddler always envisioned becoming a driver himself one day, he said his involvement this year happened strictly by chance.

“I knew I wanted to be a wagon driver one day, but about two months ago I was helping (fellow driver) DJ King hook up an outfit,” he said. “Once the outfit was ready to go, he told me to get into the box because I was going to be driving that outfit. It caught me off guard, and since then I have been practising with DJ, as well as (fellow driver) Kirby Stanley out at the Bear Creek gymkhana grounds. They both have really helped me get a grasp for the basics.”

Even though he didn’t come out on top in this past weekend’s charity fun race, Fiddler won his heat on both days. He also said it’s not about winning or losing on this tour, but rather it’s about raising money for a good cause.

“It’s a good thing for sure,” he noted. “Most of the profits earned go toward children’s charities, so kudos to DJ for setting all this up. He’s always thinking of the youth.”

The top driver this past weekend was Obrey Motowylo of Bluffton, AB. There were 17 outfits participating – drivers from both the CPCA and WPCA, as well as some new faces wanting to break into the sport. Cruise Bensmiller, 17, stepson of Vern Nolin, also made his debut as a driver in Poundmaker.

“Big congrats to the show winner over the weekend, Obrey Motowylo,” King noted. “It was great two days of racing at a top notch facility. They did have a nice cash prize for him, but being the great guy he is, he donated back to the Poundmaker Youth Club. It was nice to have a safe fun weekend with the horses.”

As for the future, Fiddler hopes to one day become a full-time driver on the circuit. In the meantime, however, he is simply looking forward to this weekend’s charity fun race scheduled for Saturday and Sunday at Bear Creek.