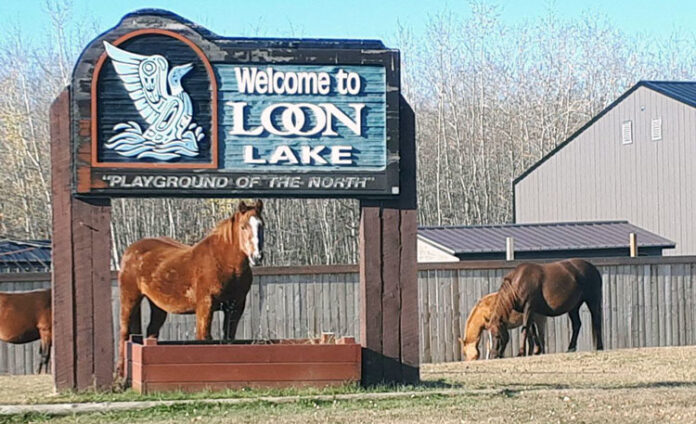 The Village of Loon Lake is done horsing around.

At its next regular meeting scheduled for Aug. 19, village council is expected to discuss the ongoing issue of stray horses in the community and what can be done to put a stop to the problem once and for all.

“The thing with horses is they do not make good pets and, if you don’t have a sizeable area to keep them in, 20 pounds of good feed or something for them to do, they’re going to become a nuisance,” remarked Loon Lake mayor Judy Valuck. “There’s a mystique about horses – everyone wants to have one, but, the unfortunate thing is, sometimes after they have horses, people will realize they can no longer care for them and simply choose to release them.”

Valuck went on to say she does not know who the horses in question belonged to before they either were released or possibly escaped due to being kept in an unfenced area. But, because the horses are not wild by nature, she also said they are not afraid of people and rely on people to provide them with sustenance, and that’s what leads them into town.

“Wild horses have been a problem in and around the Loon Lake community for many years, but the current situation is different because these horses – which number at around 12 – are tame and are now invading the village as an easy out,” the mayor continued. “These horses are causing a lot of damage to people’s gardens, and we’ve seen a lot of fences go up in the last few months in an effort to keep the horses out. Some people have roped off their properties, but the horses just push on the rope to get to the gardens.”

The herd has also been spotted several times on the local school grounds, as well as in a nearby cul-de-sac.

“Last year there were about eight horses, but I’m sure they’ve had some colts and have added to their numbers,” Valuck said.

Although Valuck did not go into detail about what potential solutions council will discuss at its Aug. 19 meeting, she did say the animals will likely be corralled and sent to auction.

“As I said, this has been an ongoing issue similar to the dog issue we have had in the past,” Valuck added. “We have a really good dog catcher now, so the dog problem isn’t as bad as it used to be. With these horses, however, I can definitely see how much of a concern it is. A number of us senior ladies work so hard on our gardens, so to see a horse wander in one day and roll all over our corn certainly does not provide any happiness.”

The Loon Lake RCMP was also contacted with regard to the stray horse issue.

“We are aware of the issue, but it does not involve the RCMP in any way,” noted RCMP Sgt. Ryan How.