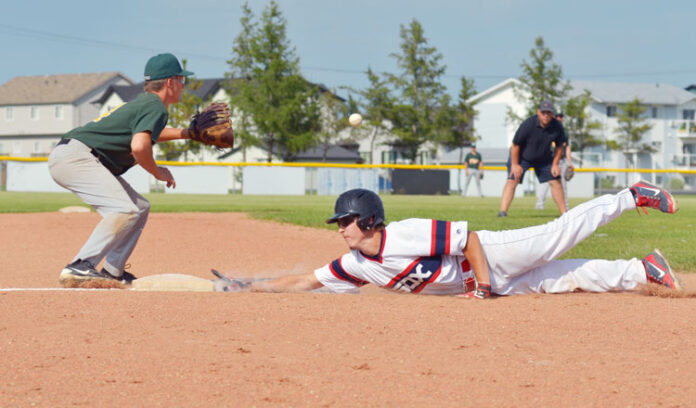 That’s how the Meadow Lake Senior Sox would sum up the modified 2020 North Saskatchewan River Baseball League (NSRBL) season, which came to an end for the hometown team when they lost a single-elimination playoff game to the Kindersley Stallions Saturday in Kindersley.

“We ended up losing by a score of 3-1, which knocked us out of the playoffs,” reiterated veteran Sox player and team manager Kevin Gerwing. “It was a well-played game with good pitching on both sides. We also had some great fielding – probably the best we’ve played defensively all year – and we left a lot of guys on base in scoring positions. We just couldn’t find the key hits we needed to put us over the top.”

With the season now over, Gerwing said the team has no regrets.

“It was just nice to be able to get some baseball in this year,” he said. “Each game we were able to play was a bonus because, at first, we never knew if there would be a season at all (because of COVID-19) and, once things got going, we never knew how long the season would last. Also, the playoff structure changed from a two-tournament format to single elimination a week beforehand, so things were never very certain.”

Still, Gerwing added, the Sox did their very best to make the most of a less-than-perfect situation. This was particularly the case with third-year Sox player Nathan Dancy who was voted Meadow Lake’s most valuable player by his teammates.

“I feel very honoured,” Dancy said. “I put in a lot of extra work this season. I showed up to every practice and I was at every game. This is my third full season with the Sox and I feel I have really matured as a player, my skills have improved and I’m hitting the ball a lot more now. I’ve put in the time and it has really helped.”

“Nathan showed a lot of improvement this year,” he noted. “He attended every practice and really gained a step as a player. He served as a catcher, a pitcher and also played infield. I believe he’s had the best year of his career so far with us and he’s only going to get better.”

Gerwing also coached Dancy when the latter competed at the Midget level.

“It’s nice to see that progression over the years,” Gerwing said.

The NSRBL teams will vote on a league MVP in the coming weeks. Meanwhile, Gerwing said he is grateful to the support the team received again this summer.

“Thanks to everyone who came out and watched our games,” he said. “It was a tough situation, but I am glad we were still able to get a season in.”

“It was a fun year,” he said. “We may have lost out in the first round of playoffs, but I believe we improved overall as a team.”