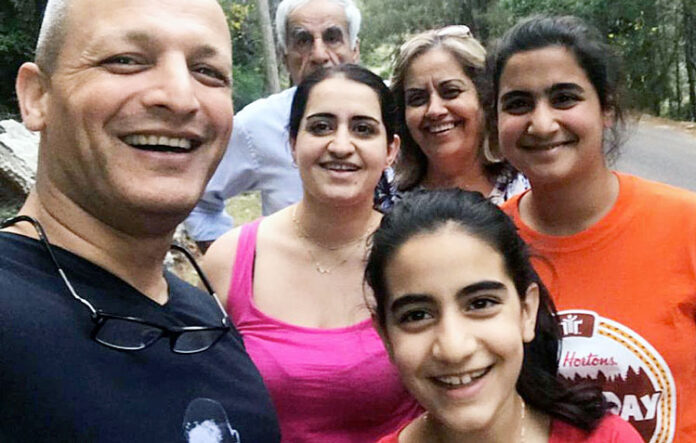 Events of international renown often strike a chord with people right here in Meadow Lake, and the recent explosions in the Lebanese capital of Beirut are no exception.

Meadow Lake resident Zouhair Malaeb was on the phone with a friend from his home country of Lebanon Aug. 4 when he heard the extremely powerful main blast occur.

“My friend lives about 25 kilometres away (from where the blast occurred), but I could still hear the noise of an explosion,” Malaeb explained. “My friend didn’t know what happened and went to check things out, while, at the same time, I saw news of the explosion on the TV. That’s when we knew it was an explosion in Beirut.”

Malaeb immediately hung up the phone and called his wife, Rana Hassan-Malaeb, who is also currently living in Lebanon with the couple’s two daughters.

“They had heard the noise as well and didn’t know what happened, but it was powerful enough to crack a window in their building,” Malaeb continued. “Thankfully, everyone was OK.”

Rana Hassan-Malaeb is the daughter of Meadow Lake’s Hiam and Yasser Hassan.

“Our daughter is in Lebanon,” Hiam Hassan told Northern Pride. “She was living here, but went back so their girls, Selena and Julia, could go to school. Her husband still lives and works here, though… My daughter lives about a 30-minute drive or more from where the explosion happened.”

On the afternoon of Aug. 4, a team of 10 firefighters was dispatched to extinguish a warehouse fire at the Port of Beirut. An initial, smaller explosion sent a cloud of smoke above the fire and created flashes of light that were caused by a stash of fireworks stored in the warehouse. The second explosion was much more substantial and occurred at 6:08 p.m. local time. It rocked central Beirut and sent a red-orange cloud into the air, briefly surrounded by a white condensation cloud. The second blast was felt in northern Israel and in Cyprus, 240 kilometres (150 miles) away. The explosion left at least 157 people dead, 80 more missing, and more than 5,000 injured. Beirut Governor Marwan Abboud estimated up to 300,000 people were left homeless by the explosions, and the government declared a two-week state of emergency. Meanwhile, the explosion was linked to about 2,750 tonnes of ammonium nitrate that had been confiscated by the government from the abandoned ship, MV Rhosus, and stored in the port without proper safety measures for six years. The blast was detected as a seismic event of magnitude 3.3 by the U.S. Geological Survey.

In addition to her daughter and grandchildren, Hassan still has other family members who live in Lebanon.

“I only have two brothers here in Canada,” she added. “I also have a brother and a sister in Lebanon.”

As for the explosions themselves, Hassan said efforts are still underway to get to the bottom of what exactly happened.

“Everybody is telling different stories,” she said. “They don’t know for sure what has happened. They are still investigating and it will take a long time. All we know is there are lots of people dead… it’s terrible. When I see it on the TV I just cry. It’s an awful situation there.”

The Hassans, along with Malaeb, talk to their family every day, however, which brings a sense of relief to the overall situation.

“We talk on the phone or on FaceTime, but sometimes there is no power… you just never know,” Hassan said.
The Hassans moved to Canada from Lebanon in 1988 before coming to Meadow Lake in 1991 where, for many years, they owned and operated Fidrock Café. Malaeb, who works as a massage therapist, came here in 2004. His daughters were born in Canada, but returned to Lebanon with their mother to attend school.

“They are learning three languages – English, French and Arabic,” he said. “My older daughter, Selena, is also a goalie on a national soccer team there, and that’s another big reason why they are still there.”

Meanwhile, the government-owned Port of Beirut serves as the main maritime entry point into Lebanon and a vital piece of infrastructure to import scarce goods. In the explosion’s aftermath, protests erupted across Lebanon against the Lebanese government for their failure to prevent the explosions, joining a larger series of protests that have been taking place in the country since 2019. On Aug. 10, the Lebanese cabinet resigned, followed shortly by Lebanese Prime Minister Hassan Diab due to mounting political pressure that was exacerbated by the event.

“I just hope everybody is safe and I am sorry for the people who died and for their families,” Hassan said.