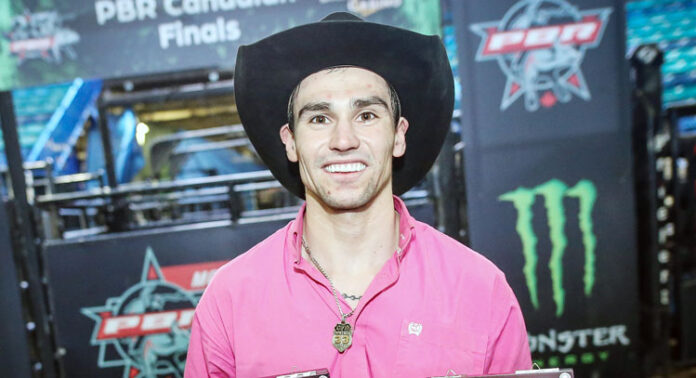 Meadow Lake’s Cody Coverchuk has had his day in court.

Coverchuk appeared in Loon Lake provincial court Sept. 24 at which time judge Michael Segu handed down a conditional sentence with regard to two drug possession charges as well as a fine for a breach of recognizance the local bull rider pleaded guilty to more than a month ago.

“The quantity of drugs in Mr. Coverchuk’s possession (at the time of his initial arrest) was substantial,” Segu remarked during last week’s proceedings.

Coverchuk’s legal issues date back to Dec. 14, 2018 when he was arrested following a traffic stop near Loon Lake. That’s when members of the RCMP’s ‘F’ Division Crime Reduction Team discovered Coverchuk was actively subject to court ordered conditions as a result of another charge laid by Lloydminster RCMP earlier that same year. Coverchuk was violating a number of those conditions and was subsequently arrested. Further investigation led to the discovery of 21 grams of suspected methamphetamine and 20 grams of suspected cocaine.

On Aug. 20, Coverchuk pleaded guilty to possession of both cocaine and methamphetamine. Initially, however, he proclaimed his innocence and was scheduled to stand trial Aug. 20. He changed his plea on that day after agreeing to have the seriousness of the charges reduced from possession for the purpose of trafficking.

“The only real aggravated factors in this particular case are the quantity of the drugs, the type of drugs and the fact Mr. Coverchuk was on recognizance at the time of his offences,” Segu stated. “However, these charges date back to December 2018, he has had no drug-related charges since, and, with respect to the term of his release, Mr. Coverchuk has followed through to some degree to attend counselling for his addiction.”

Coverchuk’s lawyer, Lisa Trach of Edmonton, joined Coverchuk in court last week and argued for her client to receive an absolute discharge when it came to the possession charges based on the aforementioned factors, and because Coverchuk’s career as a professional bull rider requires him to travel to and from the U.S.

Meanwhile, lawyer Vic Findlater – representing the Crown – argued some sort of lesson needed to be learned on the accused’s part considering Coverchuk’s position as a role model in the community. He also suggested a significant fine or a significant period of probation.

Segu ultimately decided to hand down a conditional discharge that includes a 15-month probation period, a requirement to regularly report to a probation officer and to only reside at a location of the probation officer’s choosing. Coverchuk must also refrain from using or possessing drugs and alcohol, and is also prohibited from entering any establishment that sells alcohol or drugs. In addition to this, he agreed to undergo an addictions assessment, to subject himself to searches as deemed necessary by police and to a four-month curfew which states he must be at his place of residence between the hours of 10 p.m. and 7 a.m. daily. He also must pay a $200 surcharge for both drug-related offences, complete 50 hours of community service, and he was fined $800 (plus a $240 surcharge) for the breach of recognizance.

When contacted by Northern Pride following his sentencing, Coverchuk expressed remorse for the actions which led to his legal troubles.

“I was going through some bad times in my life and I made a mistake,” Coverchuk said. “Now, I’m looking to make it right and to get my life back on track.”

While Coverchuk said there are some upcoming bull riding events he will now miss out on because of his court-imposed curfew, he added doing the right thing for himself and for the people around him is what is most important.

“If missing these events is what it takes to get things right, I can accept that,” he said.