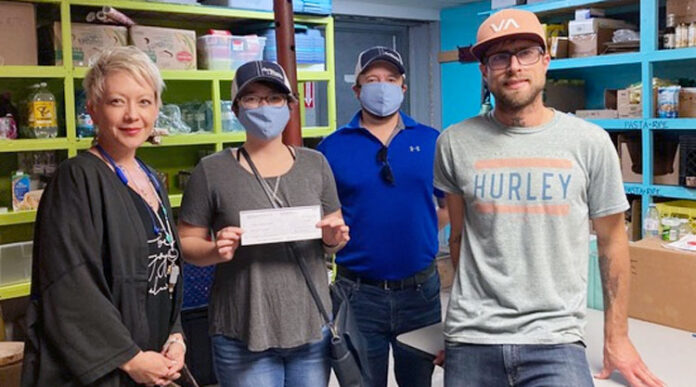 If there is one thing people in need never seem to run out of in Meadow Lake it’s hope.

According to Natanis Davidsen, executive director of Meadow Lake Outreach Ministries, the Door of Hope and the local food bank have seen nothing but ongoing support throughout the COVID-19 pandemic.

“Donations to the ministry have been seeing an increase, and we are finding more community support in the midst of COVID-19 than what we have experienced in many years,” Davidsen told Northern Pride. “I am continually amazed at the love and support people have been bringing our way since the outbreak first started in March.”

Among the more recent support given to the food bank came courtesy of the Alberta-based Len Thompson Lures which recently donated $250 worth of groceries and a cheque for $750 to the Door of Hope from money raised by the sale of six unique, limited edition fishing lures throughout the summer. Fifty per cent of the sales from these lures was given to community food banks,

“In the first weekend, we sold almost 700 lures,” stated Jessica Pallister-Dew, the company’s marketing manager. “The response took us by surprise.”

So far, 17 communities have been aided and nearly $13,000 has been raised by the campaign.

Meanwhile, The General’s Bait and Tackle, a local business that sells Les Thompson products, also contributed to the effort by doubling the initial donation.

“Len Thompson Lures are one of my best selling lures in the store,” said owner Dennis Baldinus. “It feels great to bring in the food bank lures because it is a product our customers will love as they are new and unique, but it also helps support the food bank.”

Davidsen said the recent donation is a big help to Meadow Lake Outreach Ministries’ cause.

“I would like to thank Len Thompson’s Lures for the generous and unexpected contribution of cash and non-perishable goods to the local food bank,” she noted. “We are very encouraged to see Saskatchewan business owners taking it upon themselves to contribute to a provincial-wide campaign that will touch the lives of many people in these unprecedented times. Food security is a real issue for many people in many communities, and it is a wonderful blessing to be touched by the generosity of this great company.”

Going forward, the Door of Hope is now concerning itself with collecting winter gear for the homeless.

“Martodam’s has generously offered to do a winter clothing drive on our behalf, giving donors a gift certificate in exchange for their donation of winter jackets,” Davidsen added. “Those jackets will be donated to the ministry and handed out through the soup kitchen and food bank as needed.”

Davidsen went on to state the Door of Hope is always in need of mitts, gloves and toques for all ages and all genders.

“Those items don’t last long here with people requesting them daily in the cold months,” she said. “In particular we never seem to have enough men’s winter gloves.”

Additionally, Davidsen said the Door of Hope is aware there will be a spike in services starting next month with the cutoff of CERB.

“This will affect us in the kitchen with lunch services as well as in the food bank with hamper services,” she said, adding the biggest help to them at this point is cash donations. “This enables us to put the money where it is needed the most whether it be paying the food bank manager, purchasing food for the food bank, purchasing equipment or paying for repairs or covering other costs associated with providing food security for our community.”