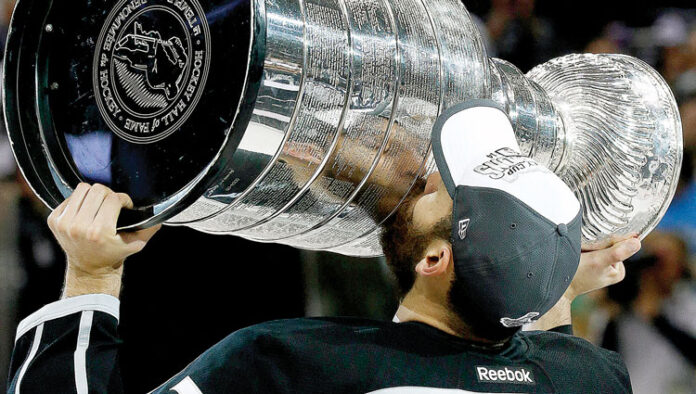 While a typical year would see Dwight King already overseas preparing for his next season with the Graz99ers of the Austrian Hockey League, the 31-year-old, two-time Stanley Cup winner is currently still at home in Meadow Lake while he considers his options in terms of the future of his athletic career.

“Even before COVID-19 hit, I took a step back from playing hockey,” King told Northern Pride. “I’ve been rehabbing a leg injury for several months now, then, of course, the pandemic set things back a little bit. But, as far as what my future plans go, I haven’t made a decision yet. I want to see what opportunities are out there”

King joined the Graz99ers in 2018 after a stint with Russia’s Kontinental Hockey League. Prior to this, he played several seasons with the Los Angeles Kings of the National Hockey League and was a member of the L.A. roster when the team won the NHL’s Stanley Cup in 2012 and 2014. He was also signed briefly to the Montréal Canadiens in the spring of 2017 before opting to compete overseas.

Last year, King played in 26 games for the Graz99ers, scoring six goals and earning eight assists for 14 points before his season was cut short.

“I got hurt back in December,” King reiterated. “I broke my leg and required surgery, so I ended up coming home in February – much earlier than anticipated. Even though there are a handful of European teams up and running now, things are not quite the same because of all the restrictions, guidelines and so on. That’s another reason I haven’t gone back yet.”

King said he plans to make a decision by December, but in the meantime said he is enjoying being at home with his wife, Lauren, daughter, Grace and son, George.

“It’s strange because I’m now home at a time of year I’m not used to being here,” he said. “My immediate family is also close by, which is nice. And, although family will always be family, I’m used to whatever hockey team I am a part of sort of filling that void when I’m away. It’s definitely different.”

During his time in Meadow Lake, King remains involved with the sport he loves. Recently, he agreed to offer on-ice sessions for young hockey players.

“I’ve been fortunate enough to play hockey at a high level, and now a few parents have reached out to me about helping to train their kids a couple of nights a week,” King said. “The sessions actually get started this week and fellow hockey player Cullen Morin will also help as an instructor. He’s a defenceman and I’m a forward, so we’ll be able to offer our experience from both of those perspectives. I’m looking forward to helping local kids become even better hockey players.”