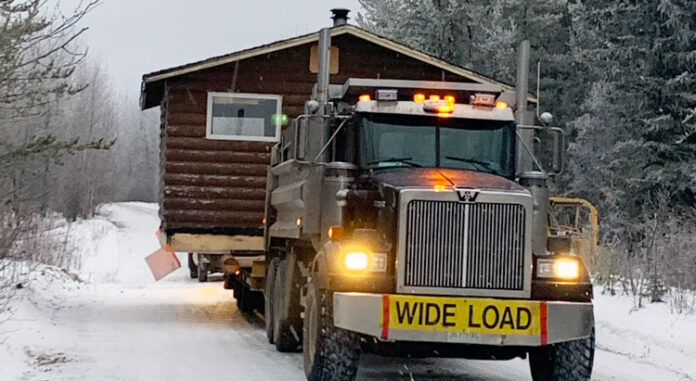 Snowmobile season is heating up in more ways than one.

This past weekend, members of the Northern Lights Snowmobile Association, transported a more than 400-square-foot building from Meadow Lake to the local trail system at a location between the city and Turtle Lake. The building, which was in place and ready to go by Sunday (Dec. 13), will serve as a shelter for snowmobile enthusiasts who frequent the trail, as well as for anyone who is in the bush who may need somewhere to warm up.

“We’ve been working on this since August – it’s been a long process,” said association president Cindy Gottlob.
The new building, known as Chum’s Roadhouse Inn, is triple the size of the previous shelter that was at that location. The decision to swap out the building for a larger one came about when the association found itself in possession of the structure which used to belong to the provincial Ministry of Environment.

“The previous shelter at that location had been in place since around 1997 or 1998,” Gottlob said. “It was quite old and it’s very small. We had an opportunity to purchase this building for a decent price, and we fixed it up. I believe it was used as an outdoor kitchen at one of the lakes originally, but for a while it was sitting in their shop yard. They wanted to get rid of it, so they auctioned it off.”

Gottlob went on to say many upgrades were needed before the shelter was ready to be moved to the trail.

“It was like a bare shell… it had inside and outside walls and framing,” she said. “It didn’t have a floor or ceiling or any insulation. We built a floor, put windows in, insulated it, built a ceiling and installed lights. We also had a custom-made stove put into it. I snowmobile all over the province, and have had the opportunity to see and learn different things from the different shelters I’ve gone to. It was a good experience to prepare everything ahead of time. We also painted the whole inside, and rubberized the floor so it’s not slippery when cold and wet. It’s come a long ways. We even put counters in it.”

The larger shelter also couldn’t have come at a better time, Gottlob added, considering how many people are expected to be on the snowmobile trails this winter.

“Since COVID-19 began, snowmobiling has just become crazy in terms of popularity,” Gottlob said. “I believe this is because you’re fairly isolated while doing it, and it’s something you can do in the wintertime. I’m on the snowmobile board for the province, and we’ve noticed an increase in snowmobile sales – they’re hard to find. My husband works at a dealership in town and they don’t have any snowmobiles to sell.”

The larger shelter, she added, will allow for snowmobilers to have a place to warm up while still being able to maintain a safe distance from each other.

“We also still have COVID rules in effect that were set by the province,” Gottlob noted. “They (province) closed us down last March, but this year we are hoping to stay open and provide that service for the snowmobilers or for anyone who happens to be in the bush who needs shelter… We’re all excited to get this in place.”

by Phil Ambroziak
The previous shelter will be relocated and used as a shelter for firewood.