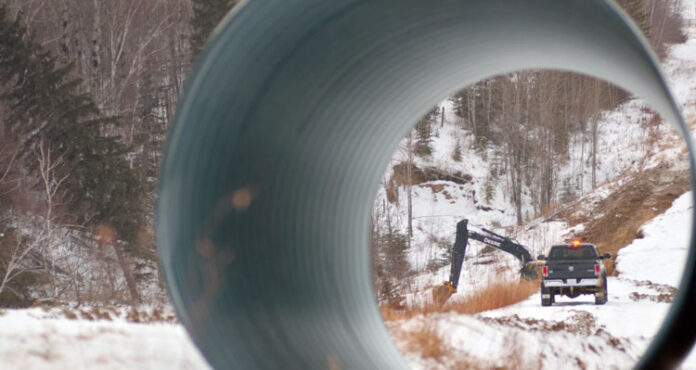 Six months after heavy rain and high water washed away a substantial portion of Cabana Road southeast of Meadow Lake, work to repair the damage is finally underway.

During its Dec. 3 meeting, RM of Meadow Lake council awarded the tender for the project to the Rapid View-based company Get Green Erosion Control, owned and operated by local resident Gerry Green. According to RM chief administrative officer Gina Bernier this selection by council comes with several benefits.

“It’s great because he’s local, which is a bonus, he was decently priced and was ready to get started right away,” Bernier said.

Prolonged rainfall last June – which experts said surpassed the 30-year average of 66.5 millimetres in the first week alone – caused water to rise in a nearby coulee and quickly overtake Cabana Road, destroying a section of the road about 10 kilometres east of Highway 4.

“The road completely washed out and the culvert that was down there collapsed,” Bernier added.

Since that time, the road has been closed and an alternate route put in place to allow for access to the area by local traffic. The reason it’s taken so long to get to the point where repair work can be done, Bernier added, primarily had to do with securing the necessary permits.

“We have been dealing with the Department of Fisheries and Oceans in an effort to get all the approvals in place,” she said. “Now that we have the approvals from them, as well as the Water Security Agency, Gerry could get started today if he wanted to. Sometimes it takes a while to go through all the hoops and loops. And with COVID, so many people were working from home so it was difficult to get in touch with some of the people we needed to get in touch with.”

Work on the project has begun, but Bernier said she is uncertain how much will get done before Christmas and, following the New Year, much of what happens will be weather-dependent.

“Hopefully, the whole project will be completed by June 15,” she said.

According to Green, it should be.

“We just started this week with isolating the culvert installation,” Green stated. “We’ll probably get it isolated and then start up some time in January or February when the weather is decent again. It won’t be completed until June because it’s a pretty big project and pretty sensitive in terms of environmental concerns.”

RM reeve Harvey Harriott, meanwhile, is optimistic with council’s decision to hire Green and his company.

“The contractor who was awarded the tender is local and very knowledgeable when it comes to this type of work, so we don’t anticipate any problems,” Harriott said. “There will be a few challenges because some of it has to be done in the winter, but it is our anticipation we’ll get a fairly large portion of it done by the spring thaw.”

In the meantime, the alternate route will remain in place until the work is completed.

“Again, this route is for local traffic only,” Bernier said. “There is an alternate route, but no semis period. No semis can go across the tiny little bridge we have there. A fellow was very kind and generous to allow us to use his field as part of the alternate route, and we hope to have that cleaned up as well so he can have his property back. We’re working at it and hopefully we can get this opened up and ready for people to go through as soon as possible.”