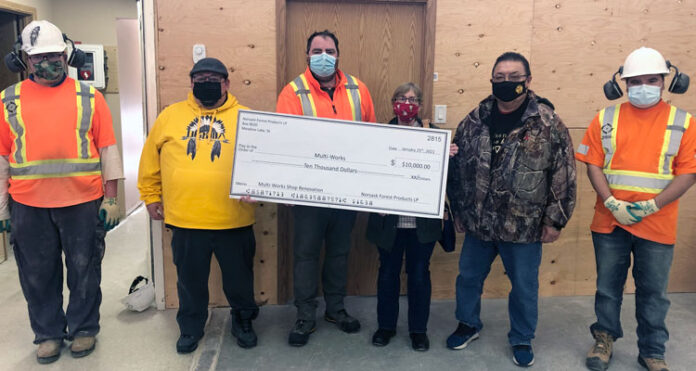 By working together great things can be achieved.

This was the message recently shared by both NorSask Forest Products and Multiworks Vocational Training Corp. when it was announced a working agreement had been reached between the two.

“For a few years now we have been making dunnage for the OSB mill, and now NorSask has asked us if we could so some for them too,” explained Dave Thickett, executive director of Multiworks.

Multiworks clients employed at the Multiworks shop will be provided with scrap material from NorSask which they will use to create dunnage. Currently, dunnage is created for the OSB mill by using scrap pieces of OSB.

“Dunnage is not a palette, but rather, in the case of NorSask, a four-foot strip of wood that is the same dimensions as a 2X4,” Thickett continued. “The mills strap these on to their product to allow forklifts to get the forks in there without damaging things.”

While Thickett is pleased with the new partnership with NorSask, he is equally pleased with a $10,000 donation the company made to Multiworks Monday afternoon (Jan. 25). This money will go toward renovations at the shop to allow for the necessary work to take place.

“The problem for us was space,” Thickett noted. “We didn’t have enough space to do both contracts, and so we have started a minor interior renovation. We’ve knocked down a few walls in the old shop, which gives us the room we need to do this. NorSask, which is owned by the Meadow Lake Tribal Council, has donated some money to us to help us do that renovation.”

Meanwhile, Multiworks has been creating dunnage for the OSB mill for several years and the addition of NorSask, Thickett added, will result in the creation of more jobs for people with disabilities.

“We would probably have between 12 and 15 people we would employ to fulfill the two contracts,” he said. “This is huge because there’s not a lot of work people with disabilities can do… We’re trying to make it work for as many people as we can.”

This was echoed by Richard Derocher, MLTC Cree vice-chief who was on hand for the presentation from NorSask.

“When we first heard about this we became very excited for many different reasons,” Derocher said. “It’s an opportunity for meaningful employment for people with disabilities, being part of the economy of Meadow Lake, the economy of Saskatchewan, something we as First Nations strive for every day. To take a kind of waste product on our part and bringing it here where it can be made useable again is a win-win for everybody.”

Thickett described the partnerships Multiworks has with both mills as “tremendous.”

“It’s fantastic to have the support of the community and community industry,” he said. “They recognize our guys can do the job they need done, and, for our guys, they have immense pride in the fact they have a job like everybody else.”

“I want to thank the board of directors of Multiworks for working on this and making this happen, as well as MLTC and its leadership for really supporting this,” Lehoux said.