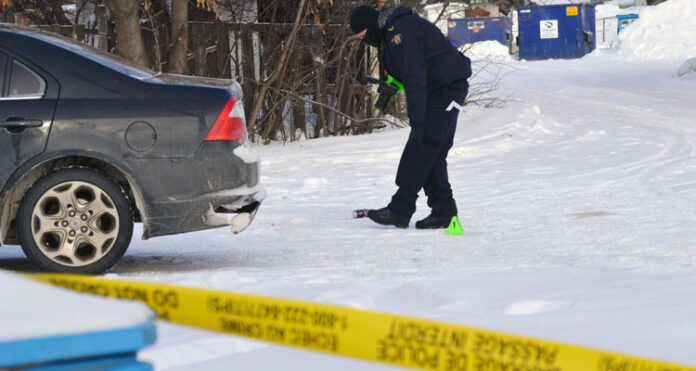 It appears Meadow Lake has become a battleground for alleged gang warfare.

At least that’s how it appeared on the weekend when the RCMP responded to several firearms incidents that resulted in shots fired, people injured, arrests made and a community growing increasingly concerned.

“Since Friday evening (Jan. 22), five firearms, masks and other items were seized as part of (a series of) investigations,” noted an RCMP news release. “Based on evidence gathered to date, the incidents this weekend were not random in nature and several individuals arrested have been identified as local street gang associates.”

On Jan. 23 around 2:30 a.m., Meadow Lake RCMP received a complaint of a shooting at an apartment complex on the 200 block of 2nd Street East in Meadow Lake. An injured adult male was located and transported by EMS to Meadow Lake Hospital and to Saskatoon for further treatment of a gunshot wound. This investigation is ongoing.

That same day, around 5:30 a.m., police received a complaint of multiple gunshots fired at a residence on the 600 block of 3rd Street West. No injuries were reported.

“While attending to the 3rd Street West call, responding officers pulled over a car in the area,” the RCMP news release continued. “A loaded firearm was observed being thrown out the car window and was located in a nearby snowbank. Two adult males were arrested without incident and officers located a second loaded firearm inside.”

Arnold and Bouvier appeared in Meadow Lake provincial court Jan. 25 and remain in custody to appear in court again Feb. 1 via video for show cause hearings.

Landlord speaks
Both properties police responded to that night are owned by local landlord Roger Epp. He said he doesn’t rent his units to known gang associates, but added criminal activity and less desirables do tend to “weasel their way in.”

“What happens is, you rent to a single mom, she has two or three kids and all of a sudden she has a boyfriend and a bunch of guys start coming and going,” Epp said.

It’s Epp’s goal, however, to prevent this from happening in the future and to only rent to what he described as “more respectable” tenants. However, he said efforts have been made in the past to evict unwanted individuals, including as recently as this month when he attempted to evict a specific tenant, but red tape prevented that from happening.

“In one of our locations we found out there was activity going on that was gang-related,” he said. “We got a letter from Safer Communities and Neighbourhoods (a provincial body that investigates suspicious properties) because they had received a complaint. We asked them for a copy of the letter, and sent it along with an eviction notice in early December to the Rentalsman (the Office of Residential Tenancies). They waited through the holiday season before contacting us in early January to say we used an old form. They didn’t read the letter that stated there was a sense of urgency from Safer Communities – a sense of urgency to get these people out. They chose instead to send it back stating we used an old form and they wouldn’t accept it.”

Epp also said it’s his desire to work with the police to try to reduce crime in Meadow Lake.

“We need more teeth from the government to do these evictions and to do them immediately,” he added.

Sunday shooting
Meanwhile, on Jan. 24 around 3:30 a.m., RCMP received a complaint of a shooting at a residence on the 300 block of 6th Avenue East, just west of Eastside Grocery. An injured adult male was located and transported to the hospital for further treatment of a gunshot wound.

The victim was later confirmed to be Scott Lafond of North Battleford. His grandmother, Leta Lafond, is a resident of Meadow Lake.

“He had surgery last night – there was aggressive damage to an artery in his leg,” Leta Lafond told Northern Pride when contacted Monday (Jan. 25). “He’s going to be in the hospital for a couple of weeks because he’s going to need therapy.”
Lafond said she was also contacted by the victim’s mother – Belinda Lafond of Prince Albert – stating the injured party has now also been diagnosed with COVID-19.

“You’re not kidding (crime is getting bad) but I’m not overly concerned about my safety (as a resident of Meadow Lake) because I don’t really bother with anybody,” Lafond added.

She went on to say she is unaware of what led to her grandson being shot, but described the situation as stressful.

“He was only here in town for one week and look what happened,” she said. “He just came here to visit.”

When police arrived on the 6th Avenue East scene, they observed three individuals running in the area. One adult male stopped and was arrested without incident, while two RCMP officers ran after the two other individuals on foot for up to eight blocks in -40C temperatures. A firearm was located discarded in the snow during this foot chase.

Evidence garnered during this foot chase led officers to a residence on the 100 block of 7th Avenue West in Meadow Lake where nine people exited and were arrested without incident. This investigation is ongoing and charges had not been laid against these individuals as of this week’s news deadline.

Advanced plan
“We know it can be scary for a community of 5,300 people to hear of multiple firearms-related incidents taking place over a very short period of time where families live and work,” stated S/Sgt. Ryan How, Meadow Lake RCMP detachment commander. “Advanced planning and collaboration between the Meadow Lake RCMP detachment and the Crime Reduction Team as part of a recently enacted gang and violence suppression strategy resulted in arresting multiple people. I am proud of the tremendous work of everyone involved. Collaboration with these support units and partner agencies has been critical in ensuring a quick response to these serious calls for service.”

Also, as part of its ongoing crime reduction strategy, the RCMP is actively seeking to arrest Brenden Tyler Yew on an outstanding charge of failing to comply with release conditions. Anyone with information on Yew’s whereabouts is asked to contact police or Crime Stoppers. Police are also still seeking Jonathan Iron and Christopher Nolan, two suspects wanted in connection with a Jan. 4 shooting that occurred on Cochin Avenue in Meadow Lake. In addition to this, shots were also fired at residences on 3rd Avenue East and 2nd Avenue West Jan. 12.