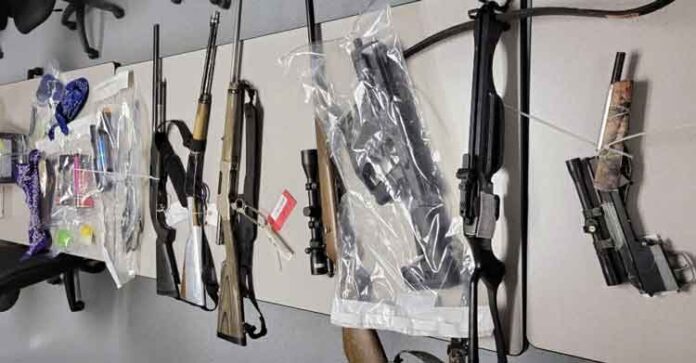 Since the start of 2021, the Meadow Lake RCMP detachment has been continually focused on gang suppression in the city and progressing the four-pillar approach to this goal. According to S/Sgt. Ryan How, the detachment has received tremendous support from units all over the province including Traffic Services, North Battleford General Investigation Section, and many others.

As part of this ongoing effort, last night (April 15) shortly after 3 a.m., with assistance of the Emergency Response Team, Jonathan Iron was arrested on his outstanding attempted murder warrant in a residence on Carter Place. RCMP would like to reassure the public in that area any loud noises that were heard during the arrest were not related to firearms and were a controlled tactic to make the safe arrest.

Over the last few months, Meadow Lake RCMP have seized dozens of firearms, knives/machetes, canisters of bear spray, batons, conducted energy weapons (Tazers), and other weapons. (The photo included here is a sample of some of the items seized only in the last two to three weeks) RCMP have also been able to seized thousands of dollars in cash and significant quantities of illegal drugs. How said serious charges have been laid on many suspected gang members during this initiative and violent offenders are either remanded in custody or subject to release conditions and monitored closely in the community. From this work, he added, there’s been a notable decline in firearms related offences in the city.

Meadow Lake RCMP acknowledge there is still a lot of work to be done as gun and gang violence continues to create extremely dangerous situations, as was seen in the event at the business on Railway Avenue April 13.

How also said the assistance and support from the public has been incredibly valuable to RCMP in the last few months and is showing results, adding any amount of gun violence is unacceptable and Meadow Lake detachment is committed to making the community feel safe again.