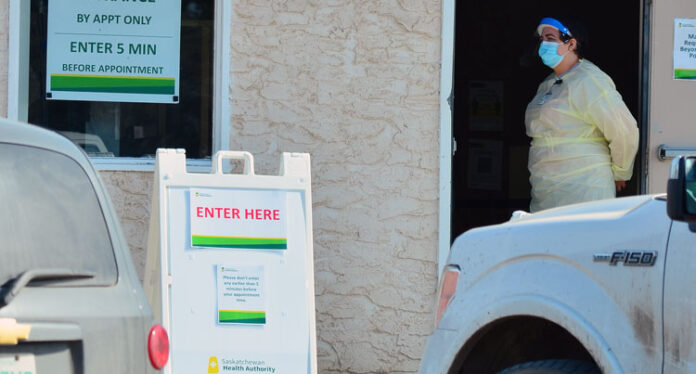 Residents of Meadow Lake and area are ready to take the upper hand against COVID-19.

According to Brent Stewart, the Saskatchewan Health Authority’s director of primary care for the Northwest, the recent COVID vaccine clinics held in Meadow Lake March 30 to April 1 were a tremendous success.

“All the appointments were filled – we vaccinated 822 people in those three days,” Stewart said. “These were people in the 60-plus age group, and, yes, it was a success. It was very rewarding to see the excitement exhibited by all the people coming to get their vac cine. Some days the things we see are not very rewarding, but it was rewarding to see all those people who were so happy to be there.”

Prior to the recent clinic, Stewart – when interviewed by Northern Pride – expressed concern about not being able to fill the appointments and possibly having to return any unused vaccines to the province for redistribution elsewhere. Going forward, however, he doesn’t see this as being as much of an issue.

“They give out the vaccine based on population,” he explained. “The province makes a decision and allocated the vaccine based on population. For example, say there are 1,000 people between the ages of 55 and 60, they would give us 80 per cent of that number which would be 800. If we didn’t use that entire allocation, but another area like North Battleford had a bigger need for vaccines, they would reallocate unused vaccines to that area. When future age groups are eligible for the vaccine, it’s my understanding we would still be allocated 80 per cent of whatever that population number would be.”

Meanwhile, a COVID-19 vaccination clinic for people 58 years and up got underway April 7, continuing today (April 8) and through tomorrow (April 9).

“They’re filling up quickly – but there are still some appointments available,” Stewart added. “We also have a clinic scheduled for April 13-15. And, from what I hear, the province will be lowering the age limit again this Friday (April 9). Once they lower it, people in the new age group can begin booking their appointments.”

Appointments can be booked online at https://www.saskatchewan.ca/government/health-care-administration-and-provider-resources/treatment-procedures-and-guidelines/emerging-public-health-issues/2019-novel-coronavirus/covid-19-vaccine/vaccine-booking or by calling 1-833-727-5829.

“From what people tell me, if you book online it takes about five minutes,” Stewart said. “If you call, it does take a bit longer but there is a call back option.”

Also, the chief medical health officer has extended the provincial public health orders announced Tuesday, March 9 and the Regina and area revisions announced Tuesday, March 24. The orders will now remain in effect until April 26, and be reviewed at that time.
Due to increased COVID-19 transmission risk in Regina and area, revisions were made March 24 including: restricting private indoor gatherings to immediate household members only; all restaurants and licensed establishments must close for in-person dining; and most event venues supporting 30 persons or less are not permitted to operate.

Full details on current public health measures can be found at www.saskatchewan.ca/covid19-measures.