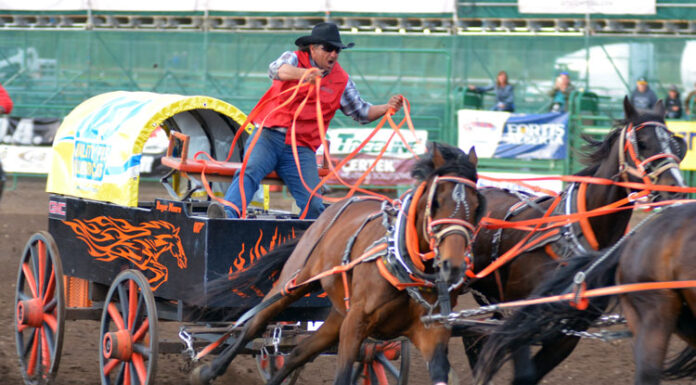 When it comes to the 2021 chuckwagon racing scene and the ongoing uncertainty surrounding COVID-19, the World Professional Chuckwagon Association (WPCA) has an important decision to make in terms of the upcoming season – live or let die.

This is the opinion of veteran WPCA driver Roger Moore of Loon Lake who said he is far from optimistic the season will go ahead at all considering recent news from the WPCA confirming the cancellation of its two first shows of the year – the Grande Prairie Stompede and the following weekend’s show at Prairieland Park in Saskatoon.

“It’s kind of disappointing, but I understand it,” Moore said. “It’s just the way the world is right now.”

With less than two months until its scheduled event in Grande Prairie and no clear COVID-19 guidelines in place related to outdoor live event mass gatherings, WPCA officials said the Stompede has been forced to officially announce the cancellation of the 2021 event.

With the 2020 and 2021 Grande Prairie Stompede cancelled, WPCA officials say drivers have collectively lost more than $1-million from the cancellation of that show alone. In addition to this, however, Prairieland Park also confirmed the WPCA races scheduled for June 10-13 will be unable to take place as a result of COVID-19 restrictions that affect the financial position of hosting the event.

“The economic impact on these communities is in the millions of dollars,” the WPCA news release continues. “From the competitors and their families who stay and shop in a community for a week to the fans and tourists who visit for a couple of days, a number of business sectors are affected. Hospitality, general retail, grocery stores and gas stations are a few of the businesses that lose out from cancelled events.”

WPCA officials went on to note they take COVID-19 seriously.

“We are committed to protecting the health and well-being of the general public along with our fans, sponsors, volunteers and members,” the news release reads. “The WPCA still has a season planned with 36 nights of racing over eight events and continues to work toward solutions to ensure a 2021 race season takes place.”

Moore, however, said as much as he would like to race this year, he doesn’t see it happening until next year at the earliest.

“I’d like to hope the rest of the season is a go, but I’m not holding my breath on it,” he said. “In fact, I have plans to go fishing already.”

Moore also said he hasn’t even started spring training with his horses, something he would normally be more than a month into by now.

“Grand Prairie and Saskatoon are our first two shows, and then we were to have another week off, so it’s basically a month off before we start if we start at all,” he said. “I haven’t heard anything regarding Calgary other than they’re still planning to go ahead, but I’m not holding my breath on that one either… if the season does go ahead, though, I will have plenty of time to get the horses ready.”

If anything, Moore added, the second half of the season might be doable, but he is uncertain as to whether or not it would be even worth it at this point.

“A big problem is sponsorship… nobody has any money, businesses are hurting,” he said. “There are a few people who might be able to do it without sponsorship, but 90 per cent of us can’t. I hope things can get back to normal by next year, and I’m surprised there hasn’t been a lot more people pack it in already.”