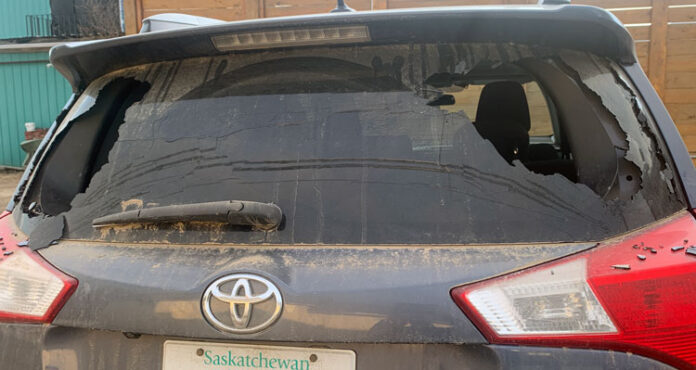 It’s a little too early for baseball season, but, unfortunately for employees at two local businesses, that doesn’t mean it’s too soon for batting practice.

Recently, a series of vehicles were vandalized after being struck with what the victims believe to have been a baseball bat or some other blunt object. The incident occurred last Thursday evening (April 8) directly behind and adjacent to Eatery on Main and the Meadow Lake Bakery.

“I went to take the garbage out around 7:15 p.m.,” recalled Eatery on Main employee Karlee Mazuren. “As I put the garbage bag down, I looked at my car and noticed the back window appeared to have been smashed. Sure enough, there were two holes – one on the left and one on the right. I phoned my boss to ask what I should do. She told me to phone the police. As I was about to do that, another employee came out to see what was happening. She then went to check her vehicle, which was parked on the street beside the bakery and, yes, hers had been smashed as well. They smashed her front passenger window, as well as her windshield.”

From there, Mazuren noticed a vehicle belonging to a bakery employee also had a hole in one of its windows.

“I went in to the bakery to tell her and she was very upset,” Mazuren said.

Mazuren also said the police arrived on the scene rather quickly.

“Apparently they had already been patrolling the area after receiving several calls about two male teens who were allegedly causing all kinds of trouble,” she said. “I’m hoping they found them, but I haven’t heard anything.”

As of this week’s news deadline, however, the police were still searching for leads.

“Meadow Lake RCMP understand how frustrating seemingly random vandalism is to the victims and community,” noted S/Sgt. Ryan How. “This matter is actively being investigated and RCMP are asking anyone with information to contact the detachment or Crime Stoppers so those responsible can be held accountable.”

Meanwhile, Mazuren reiterated her belief a bat may have been used to cause the damage. This was echoed by bakery employee and fellow victim Jennifer Madrid who said there was no evidence of a rock or other large, heavy item found inside the vehicles.

“I had a lot of stuff in my car too, but nothing was taken from any of the vehicles,” Mazuren said. “It just looked as though whoever was responsible walked through the alleyway from the north, hit a few vehicles and kept going. The police believe it was a random act and the incident the night prior was unrelated.”

Around 2 a.m. the previous morning, a break-in occurred at Eatery on Main when a suspect is alleged to have used a brick to smash a front window to gain access to the business.

Funds raised
In an effort to raise enough money to repair the damage to Madrid’s vehicle, the bakery announced for every dozen donuts sold between last Friday and April 16, 50 cents along with all tips would go toward covering repairs to Madrid’s car.

“We are saddened by this incident, as we are only trying to make a living serving our customers,” bakery staff noted via social media. “The challenge brought to our growing family is huge, but we would like to rise above it.”

Tips raised Friday at Eatery on Main, meanwhile, went toward assisting Mazuren and her co-worker with their expenses.