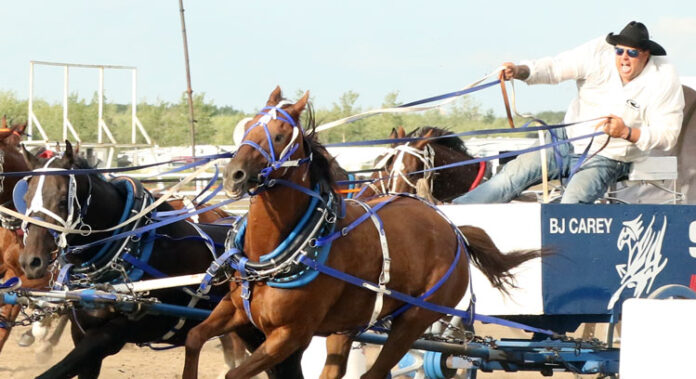 While COVID-19 continues to cause uncertainty, it appears as though there could be an official chuckwagon racing season this year after all.

Recently, the Canadian Professional Chuckwagon Association (CPCA) announced the first official show of 2021 will be held the June 24 weekend.

The races are tentatively scheduled to run June 24-27 in North Battleford, June 30 to July 4 in Onion Lake, July 9-17 in Lloydminster for the North American Chuckwagon Championship event, July 23-25 in Little Pine, July 29 to Aug. 1 in Frog Lake, AB, Aug. 5-8 at Poundmaker, SK, Aug. 13-15 in Meadow Lake and finishing up back in Lloydminster Aug. 18-22 for the CPCA finals.

“Our schedule is not 100 per cent concrete, however,” Carey said. “There is a possibility a couple of the shows might not go yet. It will depend on applications and whatnot.”

Last year the CPCA season was cancelled because of the pandemic, but some drivers did compete in a charity fun run tour organized by CPCA driver DJ King.

Carey, meanwhile, said he looks forward to racing if and when the season does indeed get underway, adding it will be up to the various show organizers to concern themselves with the various COVID-19 guidelines that will be in place come that time.

“It’s not on us to worry about accommodating for crowds and so on, that is on the various show committees,” he said. “We provide the product and the show committee provides the venue. It will be up to them to accommodate, but we will work with them the best we can depending on what needs to be done. It really comes down to what their restrictions are and our ability to work with them.”

Carey also said it will be good for both the drivers and the horses to be active again.

“We need to feed these horses regardless,” he said. “We have animals to feed and to take care of, and it’s a big expense for us if we can’t let them do what they love and if we can’t do what we love doing. That expense adds up when there is no income coming in to offset it. Either way, the season should be a good one. We’re hoping for seven shows, but well see how it goes.”

Originally from Meadow Lake, Carey also said he is excited to return and to compete in front of a hometown crowd once again.

“You bet,” he remarked. “It’s my home town and where I grew up, and it’s always nice to come home. It will be good for sure. But, it’s good racing everywhere. I love going to all the events. I don’t have one specific favourite, but I get to see family and friends when I come to Meadow Lake. That part of it is always nice.”