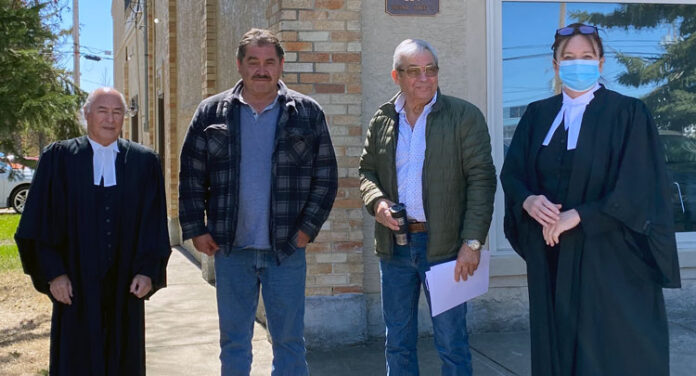 A matter of Métis rights was back before the courts earlier this week.

Monday (May 3), the Saskatchewan Court of Appeal heard arguments from lawyer Kathy Hodgson-Smith on behalf of Meadow Lake resident Oliver Poitras and Chitek Lake resident Warren Boyer. Several years ago, Poitras was convicted of hunting without a licence 37 kilometres south of Meadow Lake near Alcott Creek, while Boyer was charged with fishing without a licence at Chitek Lake. Hodgson-Smith argued both men were within the northern Saskatchewan Métis rights-bearing community when they were charged.

“One of the things we’re seeing right now is Métis people exercising what they believe to be their aboriginal rights, but being charged by conservation officers… having their nets and their guns seized, being pulled over on the lakes when fishing with their families… there’s a real fear,” Hodgson-Smith remarked. “Métis people are law abiding citizens on an aboriginal rights basis. They don’t like to be in conflict with the law, and that’s why we need to clarify where the Métis can exercise their historic rights without causing stress and strain on the relationship with provincial conservation officers, and still allow them to celebrate being Métis.”

Boyer and Poitras originally stood trial beginning in 2015. Hodgson-Smith, with the assistance of Clem Chartier, represented the duo along with a third defendant, Billy Myette.

“Billy Myette had been charged for hunting near the south end of Green Lake,” Hodgson-Smith explained. “The Métis Legal Research and Education Foundation does pro bono work on behalf of the Métis on aboriginal rights questions. All three men approached us, had no counsel, and we thought – since they are all in such close proximity – we could take them on and run all three trials together. We had to bring evidence for each of them and they all had sort of distinct legal arguments.”

Myette’s defence was successful when Hodgson-Smith was able to prove his ties to the historic Métis community.

“Historically, the province had moved all the non-Métis people out of Green Lake,” Hodgson-Smith said. “That affected (Myette’s) father who was not Métis. His mother was, however, but moved with the family into the area we now know as Rush Lake. For Billy, his defence was they were forced to move and they only moved around the lake. They never left the area.”

As for Poitras and Boyer, the trial judge found – even though they were both members of the historic and contemporary community of northwest Saskatchewan – they could not hunt and fish in the locations where they were initially charged.

“When we started to bring evidence for these three cases, one thing we claimed was these men are citizens of the historic Métis nation, are members of the modern-day successor community of the historic Métis nation and, as such, their rights arise out of the historic community because that community was present in the Northwest before confederation,” Hodgson-Smith continued. “What we were really trying to do is determine what the southern boundary is of the traditional territory of the Métis of northwest Saskatchewan. The defendants argued, in order to know how far south it goes you need to look at who the people are. They may have settled in different places for different reasons, but culturally – language, culture, history and so on – everything about them, you get all the elements of one people. The Métis are all one people.”

Several months into the trial, however, the judge determined any evidence to argue such a point would not be permitted, opting to stick with the legal matters at hand. This ultimately resulted in both Poitras and Boyer receiving fines. The decision was rendered Dec. 5, 2018 but the matter was soon appealed to the Court of Queen’s Bench which, in turn, upheld the provincial court’s decision in February 2020. From there, Hodgson-Smith brought the case to the Court of Appeal.

The Court of Appeal reserved its decision following Monday’s arguments and Hodgson-Smith said it could take months before that decision is finally rendered.