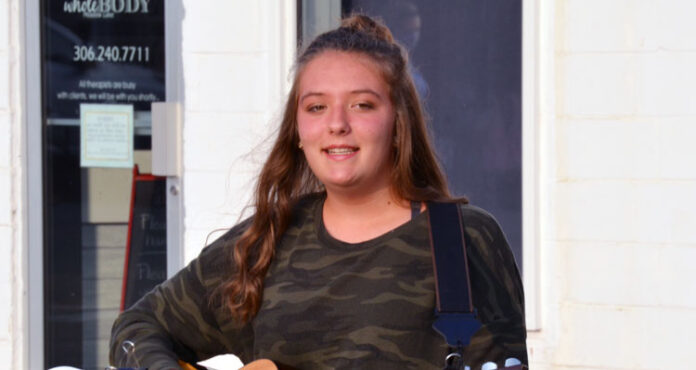 Piper MacFarlane is taking her love for music to new levels.

Recently, MacFarlane, 15, finished second overall in the Musical Theatre Junior Vocal category at the Saskatchewan Music Festival Association’s provincial finals competition where she performed her rendition of What it Means to be a Friend. The competition was held virtually, with the winners announced via Zoom Saturday evening (June 5).

“It was kind of shocking because they had posted YouTube videos of the various entries, but I had to work and had other commitments, so I didn’t have a chance to watch them until after the ceremony,” MacFarlane explained. “But, my mom did watch them and she said there were some really good people and she wasn’t sure if I would place or not. When my name was called, my jaw dropped… it was kind of crazy – not expected, but awesome.”

According to MacFarlane’s mother, Holly, it was thrilling to hear her daughter’s name announced by the adjudicator.

“We are so proud of Piper and how hard she works,” Holly MacFarlane said. “Music is a big part of what Piper loves to do, and she is very passionate about it. To see her work so hard and then, of course, to reap the rewards of that hard work was amazing.”

Although it has not been confirmed, several Meadow Lake and District Music Festival volunteers cannot recall anyone else from Meadow Lake and area placing at the provincial level.

For Piper MacFarlane, she said the second-place finish has opened her eyes to even more potential options as far as her love for music is concerned.

“It’s really brought light to what my next steps may be,” she said. “Before it was always a fun little music festival, but now I have competed at provincials. Could this be a career option? Do I want to go to Westerns next year or do something more? I am still trying to figure out the answers to those questions.”

MacFarlane’s performance can be viewed for a limited time at www.youtube.com/watch?v=Ky1A5w2qbwY.