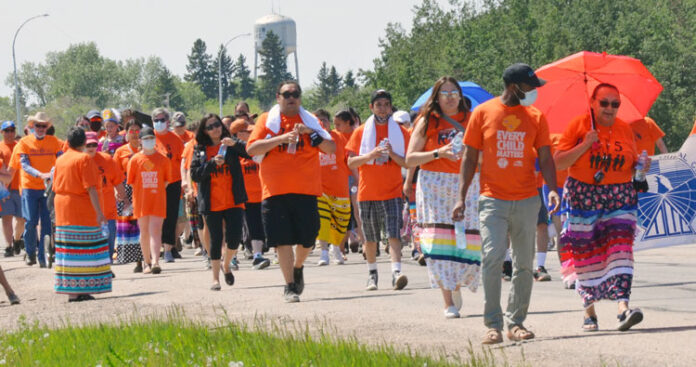 Communities united as friends and neighbours from Meadow Lake, Flying Dust First Nation and the surrounding area came together Friday (June 4) for the Every Child Matters 215 Walk.

The event, which began at Our Lady of Peace Roman Catholic Church in Meadow Lake and finished up at the Flying Dust band administration office, attracted hundreds of people all with one common goal – to raise awareness and show support in response to the 215 children whose remains were recently found near the grounds of the Kamloops Indian Residential School in Kamloops, B.C. According to organizers, the walk was held in honour of these children and all the others who never made it home from residential school.

“Wow, what a tremendous turnout today,” remarked Flying Dust member and Meadow Lake Tribal Council Cree vice-chief Richard Derocher. “I would like to thank each and every one of you for coming out this afternoon and honouring, in this particular case, the 215 children who were found in a burial site in Kamloops, B.C. We know there is much healing that has to go on amongst the First Nations people and the churches, and our aboriginal brothers and sisters, but I’m so proud of my community for once again stepping up and providing this opportunity not only for our own people, but for our relatives of Meadow Lake and other First Nations, our relatives of the Métis community to be here today. We will make sure these 215 children will not be forgotten.”

Derocher went on to introduce local elders who led those gathered in prayer. And, in keeping with the peaceful nature of the walk itself and to further promote unity, prayers for all denominations were encouraged.

“We believe that is healing, that is reconciliation,” Derocher continued. “We need to do this together. As we take this step forward in honouring these 215 children, we also honour our different beliefs, and we make sure we respect each other’s beliefs.”

Among the numerous people in attendance for the walk was elder Sid Fiddler, a Beauval Indian Residential School survivor.

According to Fiddler, many children are buried on the grounds of former residential schools, including here in Saskatchewan.

“Closer to home, we have many graves at the Battleford Industrial School where my grandparents went, we have 45 graves at Delmas where our mothers, our uncles and some of our older cousins went, we have 116 graves known of in Onion Lake, while in Beauval, where I attended, there are 45 known graves,” he said.

He was also impressed with the amount of support Friday’s walk received.

“It’s so good so many of you have come out,” he said. “As residential school survivors, we relive the pain, the loneliness, the emptiness… A lot of the people who didn’t make it, and now many are experiencing the intergenerational effects of residential schools. That’s why we are doing this, to remember and to educate, and it’s good to see non-Indigenous people are finally waking up to this reality. In the future, we’re going to work to heal from the way we were treated, and this walk is the start of that.”

“As we observed a moment of silence, I thought of all those (215) children, but more so I thought of the parents,” Norman said. “I couldn’t imagine somebody taking my son away and not being able to do anything about it. I hold no hate for the RCMP of today. It is what they were told to do for their job at the time… However, I can relate to grief, and I can relate to loss. It will be five months tomorrow (June 5) since I lost my wife, and for those parents, all the regret and words they wouldn’t have to tell their kids, all the things that would go through their mind, all the anger they would have felt, or the things they may have not done, I can’t imagine what those parents would have had to live with… it would be so tough.”

Norman went on to thank everyone who participated in the walk.

“Thank you for coming together as one and showing support for those kids and for those families,” he said. “This is not about division, it’s about bringing us together and raising awareness.”