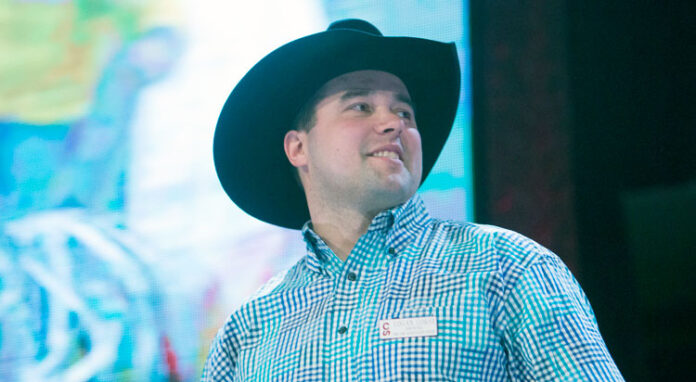 “With not knowing exactly what was going to happen with the WPCA season this year, as well as the decision by the Calgary Stampede not to include chuckwagon racing at this year’s event, I was invited to compete at the CPCA’s newest show, the North American Chuckwagon Championship,” Gorst explained.

The NCAA, which will take place July 9-17 in Lloydminster, was looking to add some experienced competitors and Gorst decided to not only come on board, but to also join the CPCA for the entire 2021 tour. And, his decision proved fruitful, as he took the top spot at the CPCA finals tarp auction held Tuesday (June 8), garnering $39,000 in sponsorship money from top bidder PWM Steel of Lloydminster.

“I was just as surprised as everyone else by the results of the tarp auction,” Gorst continued. “I had never been in contact with PWM Steel before, but a few of my friends and fellow drivers put in a good word for me… quite a few drivers received some high bids that night. It’s great to see so much support for western heritage.”

This year, a total of $318,250 was bid on the 32 CPCA drivers, an average of $9,945 per driver.
Meanwhile, Gorst’s decision to return to the CPCA also worked in his favour in terms of his current work schedule.

“Recently, I was laid off (from my previous job) and, after doing a few jobs here and there, found employment in the area of technical services with the Meadow Lake Tribal Council,” he said.

Racing closer to home, he added, makes it easier for him to manage his responsibilities at MLTC while still being part of the sport he loves.

“I also started off my racing career in the CPCA, and I know a lot of fans are excited for my return and for the return of (former WPCA drivers) Ross Knight and Luke Tournier,” Gorst noted. “Combined with the rest of the CPCA roster including so many young guys, it’s going to be an exciting year.”

While the WPCA itself still plans to have a season of sorts, many of the key shows have been postponed because of COVID-19 restrictions.

“They not only have to rely on the Alberta government to allow them to do shows, but if the show committees are not able to make money by getting fans in the seats it’s simply not viable,” Gorst said. “There are a lot of factors.”

As for his own future, Gorst said he will likely stick with the CPCA for the next few years even if the WPCA is back full force by next year.

“We’ll play it by ear, but MLTC wanted me to race in the CPCA because of the fact the shows are a lot closer to home,” he said.

This year’s CPCA finals will feature eight heats of four wagons each. Traditionally there are nine heats and a total of 36 drivers.