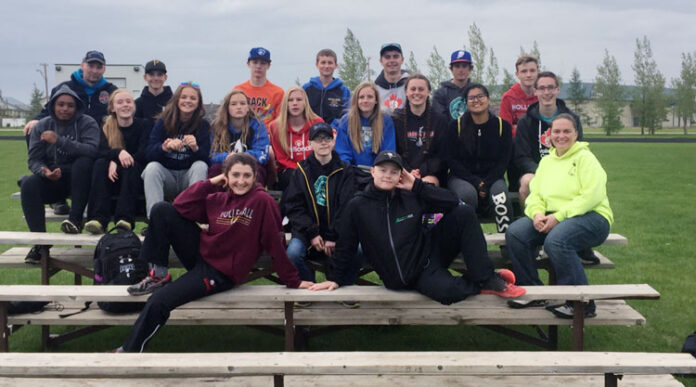 Hard work and dedication continue to pay off.

This proved to be the case once again when Karen Johnstone, a long-time teacher and coach at Pierceland Central School, was announced as a recipient of the Saskatchewan High Schools Athletic Association Service Award. This award is typically given to long-standing people who have dedicated their time and energy to the SHSAA and high school athletics in general.

“I would like to thank (Pierceland Central School principal) Terry Fortune for nominating me for this award and the Northwest (Northwest High Schools Athletic Association) crew for endorsing that nomination,” Johnstone remarked. “Once I found out I was receiving a Service Award, I looked back at previous winners. It is a real honour to be named among those people.”

Johnstone has been teaching junior high in Pierceland for close to 25 years and, in that time, has also coached numerous sports including golf, cross-country, junior and senior girls volleyball, junior boys volleyball and junior badminton. Throughout her entire tenure, however, the one sport she has been most closely associated with is junior and senior track and field.

“I enjoy the connections that are made with the students through extracurricular activities,” Johnstone told Northern Pride. “Those connections made outside of the classroom carry over into the classroom and make for a much more enjoyable atmosphere. I was very surprised to be nominated for a Service Award. As a member of the Northwest High Schools Athletics Association, I have voted on many of these nominations over the years, but it didn’t ever occur to me I would be among the recipients. I have never set out to do things to try to get recognition for myself, so I hadn’t considered this as a possibility.”

According to Fortune, Pierceland Central School has earned numerous banners and championship titles at the provincial level, particularly in the area of track and field.

“Our students have benefited from training under Karen,” he said. “As a coach, she is always available and supports all her student teams and athletes in everything they do here at PCS.”

This was echoed by SHSAA Merit Award winner Dave Speirs.

“Karen is kind, caring and she appreciates commitment, dedication and work ethic,” Speirs said. “And, best of all, she has taken her gifts and given back to sport. She champions all kids. In fact, she doesn’t just coach her own athletes, she will help others as well… she’s given me many tips with my kids over the years. Karen, thanks for your commitment to the student athletes in your school and throughout the Northwest district. They have been fortunate to have been mentored by such a great person.”

Meanwhile, Johnstone also said it’s been a tough go as of late for all high school sports because of the pandemic.

“Losing the last two seasons of many of our school sports in general has been very tough on many of us,” Johnstone said. “We have track and field athletes who have been training with us since they were in Grades 5 or 6 aiming to do their best when in high school. For those students to not get the opportunity to enjoy their Grades 11 and 12 meets is really difficult.”