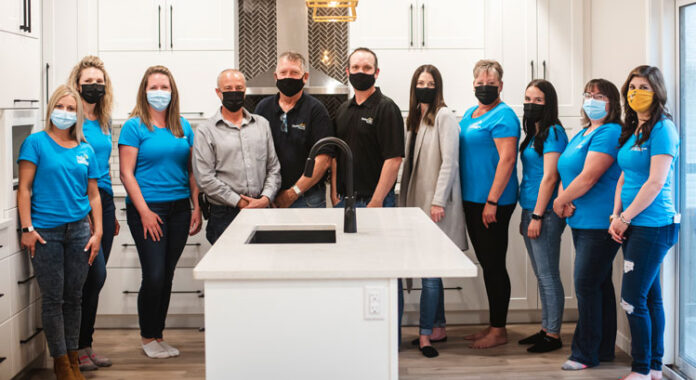 That’s the one word members of the Northwest Community Lodge Association have been waiting to hear for quite some time as it pertains to a particular fundraising project that will benefit the community’s new long-term care facility.

For the past year, the NCLA has overseen the construction of a five bedroom, three-and-a-half bath house at 20 Gibson Cres. with proceeds from the eventual sale earmarked for the NCLA’s ongoing efforts to raise money for furniture, fixtures and equipment at the Northwest Community Lodge – the new and improved long-term care building being constructed just north of Meadow Lake. While exactly how much the house project will mean for the NCLA’s efforts remains to be seen, last week the group announced the house has indeed been sold.

“It’s pretty exciting the house has sold… the new owners will take possession at the end of June,” stated NCLA president Alannah Farr. “We won’t have a total of what our fundraising committee will make, though, until probably mid-July once our final bills are paid.”

Farr also said, at the request of the buyer, the NCLA cannot disclose how much the home sold for. However, it was originally listed at $530,000.

“We’re very pleased with how fast it went – it was great,” Farr added. “It’s definitely our largest fundraising amount that will be coming in so far.”

Meanwhile, the new homeowners also expressed how much they are looking forward to moving into their new house. They did, however, ask to remain anonymous, noting the spotlight should not be on them but rather the NCLA and its continued fundraising efforts.

“We’re excited to move into this beautiful house,” the buyers stated. “It’s clear a lot people dedicated their time and skills to this project and we applaud their efforts to raise money for the care home.”

The NCLA has a $2.7-million fundraising target, of which $1.1-million has already been collected.

“Overall, things are OK,” Farr said “We’re at $1.1-million and getting a lot of community interest in our 72 Resident Suite Challenge. In the last two weeks we’ve committed four and we have a couple more on the horizon. For the residents, our staff and all the community members, this is all very exciting.”

This was echoed by NCLA member Felicia Adams.

“The biggest thing for us is to thank all the people who have supported us with the house project and helped us through the process,” she said.