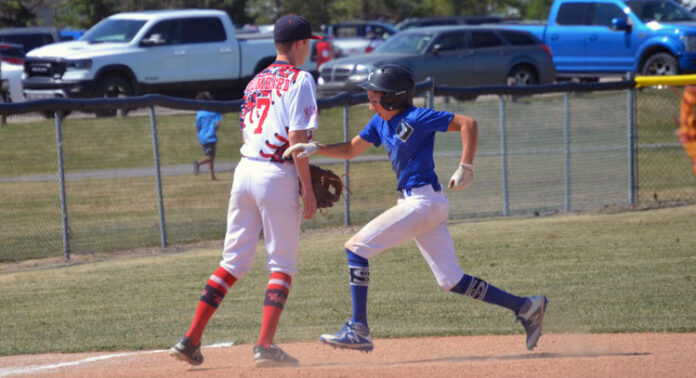 Two more provincial championships have been claimed by Meadow Lake and area athletes.

“We had a great final day,” remarked 13U coach Trevor Gerwing following his team’s championship victory in the ‘AA’ Tier 2 tournament held in White Butte just outside of Regina. “We saw great pitching performances from James Norman who threw a complete game against a very good Lumsden team, as well as Miller Gerwing and Owen Sinclair who shut down Eston in the final.”

Gerwing went on to say the team really came together at the right time.

“Our defence was good enough and we hit the ball well as a team,” he added. “James Norman also lit up the home run contest, hitting nine homers in the last round to win easily. He gave the crowd a great show.”

According to Meadow Lake Minor Baseball president Regan Beck, the 13U squad has always been very talented and, as such, he added the squad was very deserving of their provincial championship win.

U12 girls win title
The other team still riding high on its provincial championship win on the weekend is the Meadow Lake Sox U12 girls softball team which competed in Prince Albert and claimed the U12 A-Girls North provincial title.

“The girls played really well all weekend,” noted Davin Hildebrand, who coaches the U12 girls alongside Amanda Dufresne and Blaire Taves.

“It was so good for the girls,” Hildebrand continued. “They worked so hard and they had the right mindset. They supported each other so much, and their attitude and support for every player up to bat made the difference. They are a very determined group of kids and they did so well. We’re very proud of them.”

U15 boys lose at home
Back at home, however, things didn’t work out as well for the Meadow Lake 15U Sox when they hosted the aforementioned ‘AA’ Tier 1 Championship.

“Our first game was Friday evening against the North East Dodgers who we beat them 15-4,” noted Beck who also serves as head coach for the 15U squad. “It was a closer game than the score indicated at the start… we ran away with it a little later on, but, overall, we did what we had to do. We had good pitching performances and the bats came alive later in the game.”

Saturday morning, the hometown Sox earned a close win over the Lloydminster Twins by a score of 11-10.

“That one was a little different,” Beck said. “We expected a better score than that. It was really close. Lloyd played very well, free and loose, had a couple good arms and gave us some problems. We saw a really good performance by Josh Kirilenko on the mound, which was very important to us. We have a lot of pitching depth and that is what came through for us there and we were where we wanted to be heading into our third game against Parkland who was also 2-0 in the tournament.”

This encounter went back-and-forth with Meadow Lake eventually winning 17-13. A 10-7 semi-final loss, however, came at the hands of Assiniboia, the team that would eventually go on to win the title.

“Assiniboia is a very strong team that plays at the ‘AAA’ level and actually the same team we beat in the provincial final a few years ago,” Beck said. “We knew it would be a good game and it was… both teams were hitting the ball well against good pitching. They hit the ball against two of our best (Noah Pigott and Ryder Ellis), and one hit by them near the end got them over the hump. Unfortunately it was not the way we wanted things to go, but we knew coming into Sunday any of the four teams in the semi-finals could have won.”

As for the efforts to host the tournament, Beck said – from the perspective of minor baseball as well as his role as the city’s parks and recreation manager – things could not have gone any better.

“I’m very proud of the crew we had out there on the weekend and in advance,” he said. “We also had lots of good volunteers who did fantastic work, and our crews were out there very day working the diamonds. I received numerous compliments on how well maintained our diamonds are.”

Two others defeated
Other local teams to compete at provincials on the weekend included the 11U team which went 2-1 at Saltcoats, losing a tiebreaker and not qualifying for playoffs. The 18U team also competed in Kindersley, but did not make the playoff round.