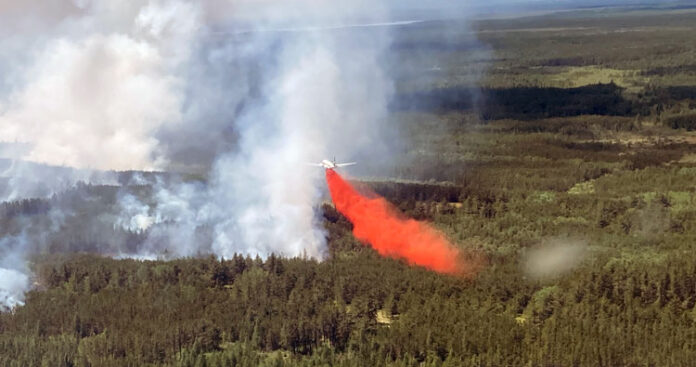 The wildfire situation in northern Saskatchewan may be under greater control now than it was earlier this month, but – when it comes to the region’s tourism industry – the threat of fire and poor air quality has been no walk in the park.

According to Meadow Lake Provincial Park manager Trevor Finlay when contacted last week, one fire remains burning within the park.

“The Strike Fire is northeast of Greig Lake, south of the east-west road and west of Highway 904,” Finlay explained. “We have closed the north and south Flotten Lake campgrounds largely because of the limited access to this area, while Highway 904 was closed briefly but remains open at this time.”

Meanwhile, earlier this month, the proximity of the fire resulted in the temporary evacuation of cottage owners at nearby Jeannette Lake.

“The fire started on a Saturday and there was concern right from the start the Saskatchewan Public Safety Association (SPSA) might call for an evacuation,” stated cottage owner Randy Songer. “Although they hadn’t done so at that time (the official call was made the next day), there were a number of people who decided to evacuate themselves that Saturday because the smoke was so bad. We recommended doing so as a cottage association, and went door-to-door to alert people as to what was going on.”

Songer said the fire is about five kilometres from where the cottages are located at Jeannette Lake, adding the all clear to return home was given about two days later. Sprinklers have also been set up to help moisten the cabins and to keep things cooler in an effort to keep the fire at bay.

“I believe we have seen the worst of it – the winds have been in our favour,” Songer added.

“We also evacuated in 2018 because a fire east of us,” Songer noted. We were evacuated for roughly three days, but it was much closer than this fire… it was at our doorsteps that time. If it would rain, we know it would be under control, but the SPSA has done a great job and we feel they have a good handle on it now.”

Also evacuated at the same time as the Jeannette subdivision was the Flotten Lake subdivision.

“No other locations were evacuated,” Finlay said when contacted earlier this week. “North and south Flotten campgrounds remain closed, but we are re-evaluating the situation later this week. SPSA has been making good progress on the fire, but the lack of precipitation combined with extremely dry conditions is presenting many challenges for them.”

Finlay, meanwhile, went on to say there have been some cancellations on the part of would-be campers and other park visitors because of air quality concerns, but the park has remained busy.

“The park remains on target for above average visitation this year,” he added.

This was echoed by Meadow Lake MLA Jeremy Harrison, who serves as the provincial minister responsible for Tourism Saskatchewan.

Sticking with the subject of tourism, Harrison also voiced his desire to see the Canada-U.S. border reopened as soon as possible considering COVID-19 restrictions have been eased if not lifted outright in both countries.

“The Canada-U.S. border needs to be immediately opened to fully vaccinated American travellers,” he noted. “That being said, the Aug. 9 date announced by the federal government at least gives some clarity to our businesses that need to have that border reopened. We are seriously concerned the federal announcement continues the shutdown of Saskatchewan airports to international arrivals. This treats Saskatchewan completely different than our neighbours – and, in fact, Saskatchewan is the only province outside of the Atlantic region that is not allowed to accept international flights.”