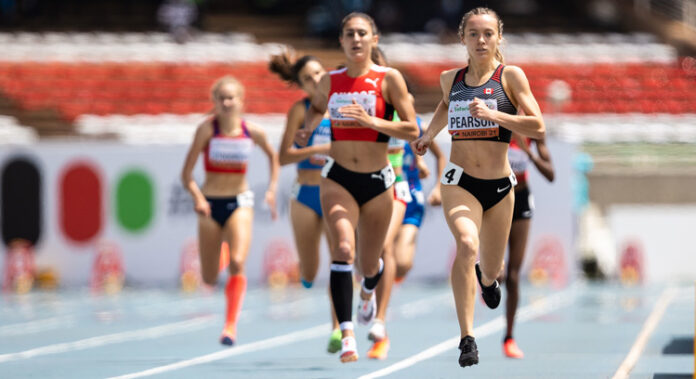 Avery Pearson is on top of the world.

While the Meadow Lake resident did not take the top spot in the women’s 800-metre event at the 2021 World Athletics U20 Championships in Nairobi, Kenya last week, Pearson, 18, said her seventh-place finish along with the personal best she also achieved are accomplishments she will never take for granted.

“It was an incredible experience overall,” Pearson told Northern Pride upon her return to Canada Tuesday afternoon (Aug. 24). “It’s all still sinking in, so it’s not going to be easy to summarize everything, but it was such a cool experience. It was also a privilege and an honour to represent Canada and to proudly wear the Canadian flag on my chest.”

With friends and family watching at home via the Internet, Pearson did not disappoint in her opening race Aug. 19, winning her heat with a time of 2:07.99

“You needed to be in the top three in your heat to qualify for the semi-final heats,” Pearson explained.

The semi-final race took place Aug. 20 and saw Pearson clock in at 2:07.46 for the fifth-place finish. This qualified her for the final, which took place Aug. 21. In that race, Pearson was seventh but earned a personal best time of 2:06.42. The winner, Ayal Dagnachew of Ethiopia won the event with a time of 2:02.96.

“During the races, it was so cool to see everyone from different countries standing on the starting line – each time there were seven different girls I was running against from seven different countries,” Pearson said. “And, while chatting with them afterward, it was interesting to see and hear them speaking different languages from so many different places. The massive stadium was also so incredible to run in, and so exciting.”

Outside of the stadium setting, however, Pearson said she didn’t have much of a chance to see and experience Kenya or its capital city.

“Because of COVID-19, we spent most of our time at our hotel,” she noted. “We weren’t allowed to go on any excursions. We did get to see some of Nairobi when driving on the bus to and from the training track and to and from the competition track.”

Although, she added, there were some exciting moments.

Going forward, Pearson will attend the University of Saskatchewan this fall where she plans to start training with the school’s cross-country team.

“Competing at the world level was so great and this is just the beginning,” she said. “I would like to go back next year and be on that team again. Right now, I’m going to enjoy some down time and get ready for university.”

A special event to celebrate Pearson’s involvement on the world stage is scheduled for tonight (Aug. 26) at the PineRidge Ford Amphitheatre in Lions Park starting at 6:30 p.m.