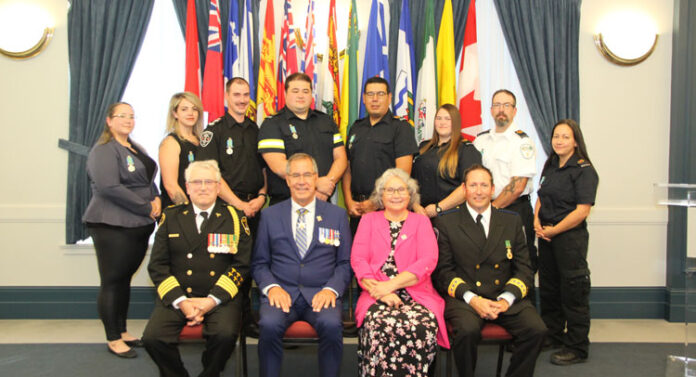 The work of first responders from Meadow Lake and other parts of the Northwest has not gone unnoticed.

On Sept. 15, Lt.-Gov. Russ Mirasty presented Exemplary Service Medals and Star of Life Awards to emergency medical services professionals at Government House in Regina. The 2021 recipients were honoured during a morning ceremony, while the 2020 recipients were part of an afternoon ceremony and among the 2020 Star of Life Award recipients were the Meadow Lake road ambulance team consisting of Jim Bandola, Robyn Bishop, Frank Munroe, Carah Oftedal and Frank Richardson, the Beauval EMS team including Roslyn Corrigal, Cameron Harrison and Samantha Hood, and the Ile-a-la Crosse EMS team of Robert Dubrule, Kalvin Jones, Megan Koskie, April Morin and Ronda Williams.

“It’s a great honour to receive this award,” Harrison, a primary care paramedic, said. “A lot of EMS work does go unrecognized by the general public, and receiving the award brings awareness to the hard work and dedication we have, and some of the severe calls we as EMS respond to that will stick with us for the rest of our careers.”

The three teams were recognized for their response efforts following a fatal motor vehicle collision Oct. 25, 2019. A Meadow Lake paramedic team was responding to Beauval to transport a patient. On the way, the ambulance was involved in a motor vehicle collision that resulted in several fatalities. Beauval EMS and Ile-a-la Crosse EMS responded immediately. The incident resulted in the deaths of children Jerome Coulineur and Kinzey Angeline Iron-Couillonneur, as well as Meadow Lake paramedic Leigh Schroeder.

“Recognizing the challenging road conditions and, moreover, the mental strength and fortitude the crews from Meadow Lake, Beauval and Ile-a-la Crosse must have had was astounding, as they each responded to the crash site,” reads the citation given during last week’s ceremony. “The feeling of helplessness, frustration and despair during that drive to the scene is something that will likely be with them for a lifetime. From the time the tones sounded, as each of the paramedics learned of the collision, to the paramedics arriving on scene, they each excelled as professionals, as leaders, as heroes.”

The Star of Life Award recognizes outstanding commitment and acts of bravery.

“Any time you know it’s one of your own out there, your adrenaline gets pumping a little bit more than usual,” Harrison said “Being on those scenes, you need to provide care to all patients, including those of your own, which, fortunately, we don’t have to do on a day-to-day basis. It definitely heightens the intensity of the situation, much like it did that night.”

This was echoed by Koskie, who serves as manager of EMS operations Northwest and an intermediate care paramedic.

“You don’t wake up with any pre-conceived notions of what our day is going to be,” she said. “These guys, day in and day out and no questions asked, when that radio goes off, they are out there caring for their community. One of our worst nightmares, of course, is responding to something of this calibre whether it involves a colleague, a community member or somebody we don’t know, it never sits right with any of us. We still give it our all, give it our best and we hope for our best. That dedication all these guys put out there is phenomenal.”

Harrison, meanwhile, said more people than EMS workers deserve to be recognized for their efforts that night.

“EMS are the ones who received this award, but there were a number of police officers, dispatchers, firefighters and nurses from the Beauval clinic who helped make the situation go as smoothly as it did,” he said.