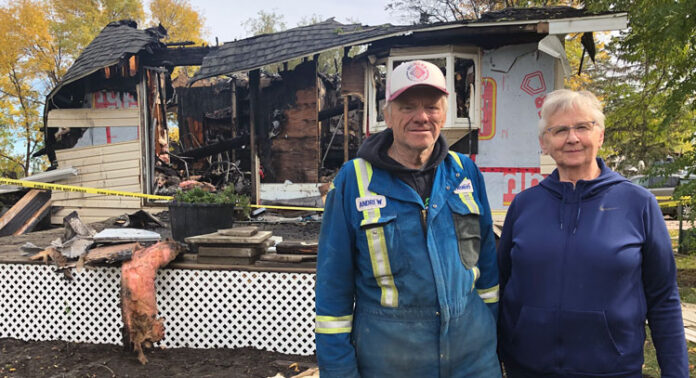 Life can change in an instant.

That is a lesson that was reinforced for Bear Creek Road residents Walter and Elaine Vidal last week when, early Friday morning (Sept. 17), their home of more than 40 years was destroyed by fire.

“It was about 2:40 a.m. when I woke up because I heard a crackling noise,” Walter Vidal explained.

As he investigated the source of the strange noise, Vidal quickly discovered fire had escaped his stone fireplace and was overtaking an area between the fireplace and the wall.

“I could see fire coming from between the rock and the wood,” Vidal added. “I immediately threw a pitcher of water on the fire, but it didn’t do anything and that’s when I realized things were a lot worse than I thought.”

As Elaine Vidal called the fire department, her husband exited the home in search of a garden house.

“If I would have had my pressure washer up and running, I think I could have stopped the fire because the pressure washer has lots of hose,” Vidal said. “It was sitting right out front because I had just used it a couple of days ago, but it had run out of gas. Instead, I used the garden hose, and I had the north side of the house all out but it quickly started up again. I even climbed a tree and was up on the roof of the house trying to put the flames out until the power went out and I lost my water. By that time, the fire department was here and I had to get off the roof because it was becoming too dangerous.”

According to Meadow Lake fire chief Neil Marsh, firefighters were called at 2:43 a.m. Friday to what was reported as a chimney fire.

“Fire crews arrived shortly after to find the main floor and roof of the house heavily involved,” Marsh noted. “Fire crews remained on scene until 9 a.m., while the RM of Meadow Lake assisted with water supply. No injuries were reported.”

Vidal, meanwhile, said he doesn’t understand what caused the fire considering the fireplace in question was used regularly for more than 35 years.

“It was chilly in the house last night (Thursday) and my cousin from Prince George – he’s 89 years old and it was the first time he’d ever been here – asked if the fireplace worked,” Vidal added. “I put a fire on for him and went to bed around 10:30 p.m.”

Vidal went on to say construction of the house began in 1974 and he and his family moved in Dec. 4, 1975. The fireplace was installed a short time later.

“This (fire) is unbelievable… I’m in shock,” Vidal said. “At first I thought it was just a little fire and the house was not going to burn down. I lost all sorts items related to my business (Triangle Trenching) too, but luckily the firefighters grabbed my briefcase. I had hours and hours of work I had done for customers in my briefcase.”

Vidal also said the plan is to rebuild the house.

“We can’t leave this location until we’re too old to live here anymore,” he said. “Right now, though, it’s a shock and too sudden to know what we’ll do next. We’ll have to wait and see what the insurance adjuster says. Can we get something going this fall, I don’t know? It’s too quick to know what we’ll do.”

Marsh, meanwhile, shared seasonal fire safety tips that could help prevent other Meadow Lake and area residents from experiencing the same situation the Vidals have.

“Owners of wood-burning furnaces, stoves and fireplaces must have their chimneys cleaned and inspected at least once a year,” Marsh said. “Creosote buildup and failed chimney components can lead to disaster.”

He also said gas and oil-fired furnaces should also be inspected annually by a qualified technician.

“Block heater cords should be checked, and replaced if worn or damaged,” he added. “All occupied buildings in Meadow Lake must have working carbon monoxide (CO) alarms and all residences must have working smoke alarms as well as CO alarms.”