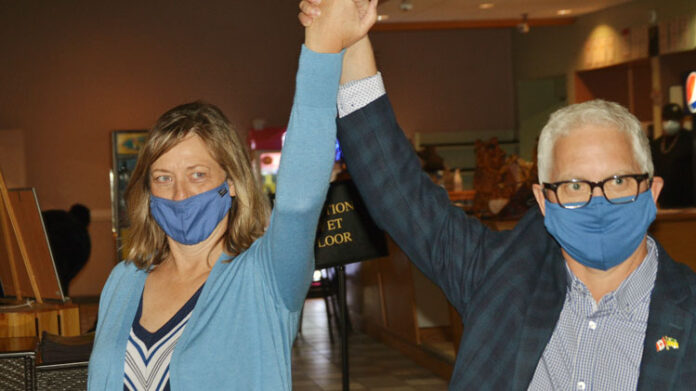 Gary Vidal has done it again.

“In early 2020, we gathered as a team at a camp in Choiceland, SK and I challenged my team on that day by saying, if we do the right things day after day, even if it’s not politically expedient, we would some day get the outcome we desire,” Vidal told the crowd of supporters who gathered at The Bear’s Den restaurant in Meadow Lake to celebrate his win. “If we didn’t get that outcome, we could hold our heads high and say we did the right thing. This result today says you can do politics differently and it can work. We set out to represent everyone in the riding whether they voted for us or not and we are seeing the results of that tonight, and I thank all of you for that.”

Vidal’s victory was bittersweet, however, as earlier in the evening news sources were projecting a Liberal government would once again be formed following the election, and, shortly thereafter, it was determined it would be a Liberal minority government. As of press time, the Liberals had secured or were leading in 156 seats, the Conservatives in 120, the Bloc Québecois in 31, the NDP in 29 and the Green Party in two, while the PPC had no seats.

“Tonight Canadians made the choice of who is going to be their government,” Vidal continued. “We may not be thrilled with the results, but, at the end of the day, democracy is the strength of the country we live in and we need to respect that. We need to work within the system. Canadians are expecting us to work together to accomplish things for Canadians, and that is exactly what I will go to Ottawa and do. I will work with people across the floor, with people across this vast riding, and I will work to garner results with the people of northern Saskatchewan.”

Vidal went on to comment on the COVID-19 pandemic and the struggles it has caused throughout the country and around the world.

“The past year-and-a-half has been a difficult journey for all of us,” he said. “Canada is hurting. Saskatchewan is hurting. Families are being divided, social groups, churches, organizations are being divided. It’s time we make the serious effort to learn to respect one another regardless of our opinion on so many things. We have to stop letting lines in the sand, politics, COVID, all of those things from dividing us and we need to unite around the good things we can accomplish.”

He also said northern Saskatchewan is the perfect place to set the example for this.

“With all our diversity, with all our challenges, we can be the example of unifying, of respecting each other,” he said. “There’s an old saying, ‘resect begets respect’. If you give respect, you get respect. That is a lesson for all of us and I challenge each one of you to consider that to be a model to live by.”

The newly re-elected MP also expressed his gratitude to the many people who supported him throughout the campaign.

“On a night like tonight there are many thanks that need to be offered,” Vidal noted. “We wouldn’t be standing here tonight celebrating if it wasn’t for an absolute wonderful team of people I had to work with. If you want to get things done, you surround yourself with good people, and I have an excellent team. You know who you are, folks. You worked behind the scenes and, for that, I am very thankful. There are also a whole bunch of people who volunteered during the last six weeks and many of you who contributed hundreds even thousands of dollars to our campaign. We don’t take that for granted. To each and every person who cast a vote for outside tonight, I am eternally grateful. Thank you.”

Vidal was also sure not to exclude his family.

“If you don’t have a solid family around you, you’re going to fail miserably,” he said. “My kids, their spouses, even my little grandbaby have supported me on this journey and I appreciate that. And, obviously, the support of my wife, Lori, has been unbelievable. A huge thank you to everybody. I appreciate each one of you immensely.”

For the full story, see this week’s edition (Sept. 23) of Northern Pride.