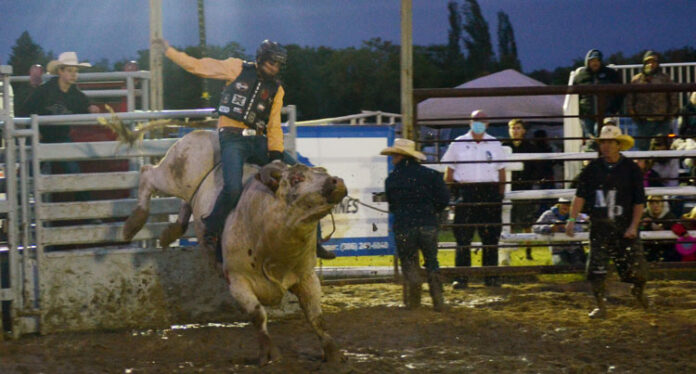 Bull riding is back.

More than 800 people were in attendance last Thursday evening (Sept. 2) for the Bustin’ Our Under the Lights event, sanctioned by Bull Riders Canada and organized by the Meadow Lake Stampede Association. Twenty-five competitors took part from across western Canada, as well as Australia and Paraguay.

“The gates opened two hours to the show starting, and people began showing up early as expected,” remarked Stampede Association executive member Jenay Larsen. “This is a cowboy town and it’s been a very long time since they were able to attend our bullarama.”

The event took place at the outdoor Legacy Arena located adjacent to the infield of the local Stampede Grounds. This area was developed to host equestrian events as part of the 2012 Saskatchewan Summer Games.

“We decided on the Legacy Arena because a bull riding event only requires a relatively small area,” Larsen continued. “And, there’s grass on the fringe so spectators wouldn’t be walking through mud if it rained. And, as it happens almost every year, it just poured the day before, so we able to keep the public mostly mud-free.”

The big winner at the local show was Cody Coverchuk of Meadow Lake.

“Fans stayed right to the end, as our local rider, Cody Coverchuk, was the last bull rider of the night,” Larsen added. “It was best for last, and I think everyone who came got their money’s worth.”

An added attraction this year was clown and barrelman Crash Cooper – a renowned rodeo personality who has performed at many of the big rodeos including the Calgary Stampede, National Finals Rodeo and Canadian Finals Rodeo.

“He had an open date, so we booked him,” Larsen noted. “He had the crowd laughing heartily throughout most of the evening.”

Among those in attendance for the bullarama was Meadow Lake area resident Linda Nadon.

“It was just great of the Meadow Lake Stampede Association to bring something back to our community,” Nadon said. “With COVID-19, we missed our rodeo two years in a row, and this last-minute decision to bring the bull riding event here was wonderful. So many of us were able to come out and enjoy the evening, and I know it must have been a lot of work for them to put everything together, but it all came together nicely.”

“They really brainstormed in terms of how they could make this work, and good for them,” she noted. “It was well worth the wait – some of the cowboys rode two head in the long go, and then they had a championship top six final showdown. And of course, Cody Coverchuk pulled it off in the end, which definitely made it even better for the hometown crowd.”

“Our event was put together only in the last few weeks because of the pandemic restrictions, and from comments during and right after, it turned out better than we expected,” she said. “Now we turn our attention to our 100th anniversary next summer. We will be having planning meetings throughout the fall and winter – it’s going to be great.”