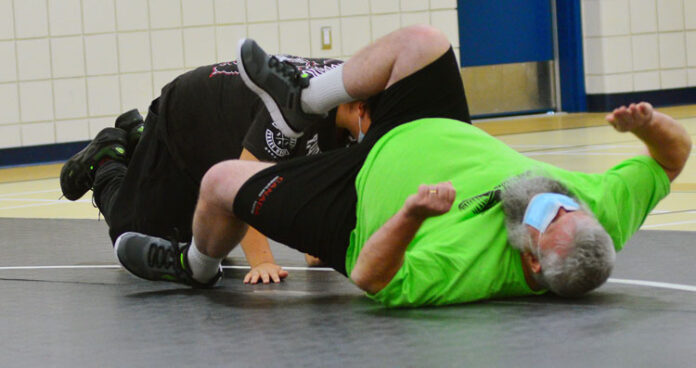 COVID-19 doesn’t have the Meadow Lake wrestling season down for the count quite yet.

Although the Northwest School Division’s Fall 2021 Return to School Plan prevents external user groups from accessing NWSD facilities at this time, the Northern Pikes Wrestling Club refuses to tap out and, in turn, has found an alternative location to hold its weekly practices. Traditionally, club members would gather at Carpenter High School in Meadow Lake, but, as of this week, are holding practices at Kopahawakenum School at Flying Dust First Nation.

“Kopahawakenum School has been kind enough to invite us to use their facility,” remarked Northern Pikes head coach Chris Brownrigg.

Protocols at Meadow Lake Tribal Council schools differ from those now in place at NWSD schools, meaning the wrestling practices can go ahead.

“During our practices, however, we will be following the Wrestling Canada protocols which require all coaches and athletes to be fully vaccinated,” Brownrigg continued. “That tends to exceed anything currently in the marketplace as it were as far as standards for the athletes are concerned. But, it will likely mean we’ll have a lower turnout of athletes because, currently, only wrestlers age 12 and up can get the vaccine.”

Last year’s Northern Pikes season was cancelled because of the pandemic, but Brownrigg said it was important to reactivate the group this fall.

“Being a Winter Games year, there may be kids in the program who happen to be the right age and want to have a crack at it,” he said. “We don’t want them to miss out on this opportunity.”

The Saskatchewan Winter Games are scheduled to take place in Regina in February.

“The Saskatchewan Winter Games organizers believe it is safe for wrestling to occur at their event, and Wrestling Canada is still sending athletes to international tournaments,” Brownrigg said.

“There are some parents who have decided not to have their kids participate this year and I respect their decision to do what they believe is best for their kids,” Brownrigg added. “The cool thing is I have Brian Gislason who has joined our club as a coach, as well as a local RCMP member. Because I don’t think I will have as many athletes, I am going to try to make this a coach development year. We’re also in need of a female coach, however. It’s always easier for female athletes to have a female role model.”

Brownrigg expressed his appreciation to Kopahawakenum School for allowing the club to access the school gym.

“I will be running a learn-to-wrestle program with their students during the day and using their protocols,” he noted.

As for the 2021-22 high school wrestling program, Brownrigg said it is a go and, because it is a school-sanctioned event, practices can take place at CHS.

“I have started to arrange with the teachers to run an introduction to wrestling during gym classes one week before the season starts Nov. 22,” he said.

Meanwhile, the Meadow Lake Gymnastics Club – which for several years has operated from the gymnasium at Lakeview Elementary – cancelled its fall sessions yet remains optimistic the gym will once again become available to external user groups come January. As for Meadow Lake Co-ed Indoor Soccer, a group that normally gathers at Gateway Middle School, sessions have also moved to the gym at Kopahawakenum School this month.

“We are back at it this year, thank goodness,” stated organizer Kelty Esau. “We had to move locations out to the Flying Dust school gym mostly because of space. Normally we were playing at Gateway Middle School. Our season runs from October to March.”

The indoor soccer program was on hold for a year-and-a-half because of COVID-19.

“Normally we would have about 30 or so people, but this year numbers are down to around 15-20 registered players,” Esau said.