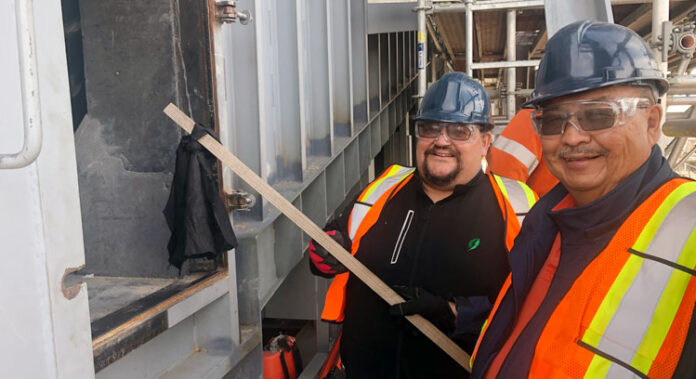 Earlier this week, the Meadow Lake Tribal Council celebrated a milestone in the construction of the new bioenergy facility east of Meadow Lake when the very first flame was ignited inside the combustion chamber.

“We want to have this moment recognized because that old beehive burner (at the adjacent NorSask Forest Products) has been going for pretty much 50 years straight and for it to be replaced with this new, high-tech, environmentally friendly energy producing facility is just outstanding,” remarked Al Balisky, president of MLTC Industrial Investments, the company that oversees NorSask. “It’s the very first flame inside that new combustion chamber, and there’s no ash, no embers and almost no smoke.”

“This is a formality, but there’s also a technical requirement for it,” Balisky said. “It’s the bake-out of the refractory that’s inside. The refractory inside the chamber itself needs to have the moisture driven out. The bake will last four or five-days after which the fire will be turned off and we probably won’t start it again until December some time.”

That is when the facility is expected to officially go online.

“We’re pretty much on schedule,” Balisky added with regard to the overall project itself.

The MLTC Bioenergy Centre, as it is named, will generate carbon-neutral green power using sawmill biomass residuals. It will be the first plant of its kind in Saskatchewan and is expected to produce 6.6 megawatts of baseload electricity to power approximately 5,000 homes with greener energy. The project is expected to decrease greenhouse gas emissions by more than one million tonnes over 25 years, and reduce smoke and other harmful matter to significantly improve air quality for residents. Revenues from the plant will also support essential programs and services including child and family services, education, and health and youth development for the nine-member First Nations comprising the Meadow Lake Tribal Council.

“SaskPower will have its connection complete by Dec. 1 which will technically allow us to put power on the grid,” Balisky continued. “However, with December being the month it is it will be a bit challenging with Christmas and all that. We will have to navigate around a shorter month, so January will be our big month – fully up and running. Certainly it’s been a much anticipated construction project and to get to the end of it now has been very gratifying. It’s also been a very significantly supported effort by a variety of different enterprises, and we’re grateful for the technical and construction support from so many competent folk and businesses. We are now able to take it and run with it, so we’re very excited about that.”

According to Derocher, the bioenergy centre will go a long way in supporting the MLTC’s nine bands.

“I don’t know if you know what this means to our communities,” he told a group of assembled workers while visiting the construction site Tuesday afternoon. “This means we’re on the road to being self-sufficient. It gives us the opportunity not to rely on government dollars.”

He went on to say the subject of long-term care has often come up at MLTC meetings.

“We don’t have anything in the way of long-term care facilities in the northern communities like Meadow Lake or all the small communities around us have,” he noted. “Our elders have to go as far away as Swift Current, Big River, Prince Albert, away from their families for the last years of their lives. This (bioenergy centre) means we can start building these facilities with our own source revenue, so we can have our elders at home, so they’re not all alone in a foreign community. This project is not just a money maker, it’s way bigger than that. It will help us to be self-sufficient and to look after our communities the best way we know how.”

He also expressed his gratitude to everyone who has contributed to the project.

“As leadership we have visions, we have ideas, but we don’t have the know how,” he said. “That’s why we get professionals like you to help us.”

This was echoed by McIntyre.

“Thank you for being here and supporting this initiative,” he said.