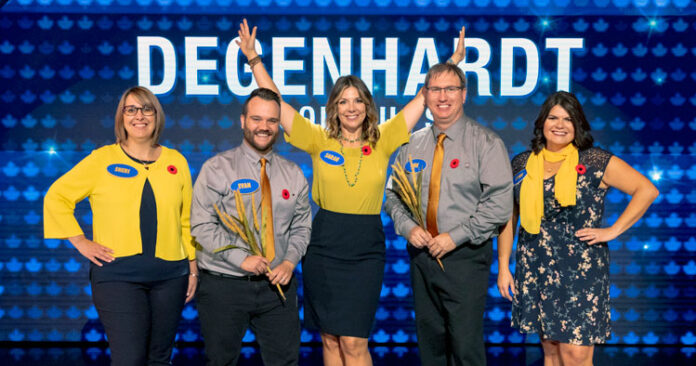 Television viewers from Northwest Saskatchewan will likely tune in to the game show Family Feud Canada Nov. 11 to see just how well a group of contestants with ties to the Goodsoil area do when news broke recently of their participation in the episode which was taped in mid-September.

“It was an unreal experience,” remarked Joe Degenhardt, a former Goodsoil resident who now lives in Esterhazy.

Degenhardt and four of his first cousins – Sheri, Evan, Sarah and Lynn – comprised the team and, although none of them live in Goodsoil now, they are proud of their family’s history and wanted to ensure the community and region was well represented on the national stage.

“We actually auditioned for the 2020 season, but because of COVID-19, things were cancelled,” Degenhardt continued. “We put together an audition video – these little clips as a way of showing our energy, our style and just to stand out – and sent it in. Eventually, someone from Family Feud got in touch… That led to Zoom meetings and eventually to us appearing on the show. The whole process took about a year-and-a-half.”

Degenhardt said the cousins chose to audition as a way of getting together and doing something special after the pandemic had kept them apart for so long.

“We were one crazy group of people looking for an excuse to get together,” he said. “With this whole COVID thing, we needed a silver lining around what’s been going on in our world, and this has been it for us. This has been a huge secret we have been trying to hold on to because we didn’t even know until recently when our episode would air.”

Family Feud Canada is taped at a CBC studio in Toronto.

“They fly you there, you show up the next day, go through all the COVID testing, they put you in a room by yourselves and then wait your turn to practice your entry,” Degenhardt said. “You know that pose each family does at the beginning of each episode? Well, they show that pose at the beginning. You need to practice all that, which makes sense as they know what makes good television.”

As for why the group chose to list Goodsoil as their home community while on the show, Degenhardt said it was simply a way for them to pay tribute to their family and their common roots.

“I was personally born in Goodsoil 48 years ago,” he noted. “Our parents were born, raised and went to school in Goodsoil. Of our particular family, however, none have lived in Goodsoil since the late 1970s. But, there are Degenhardt cousins still in the area.”

Among those looking forward to watching the episode when it airs is Goodsoil mayor Don Eckel.

“It’s an honour when you have people on national TV saying they’re from your hometown,” Eckel said. “This is great.”

Eckel went on to say it should provide Goodsoil with some good exposure.

“When they mention the name, maybe people will Google it and be amazed by how great the area is,” he said.