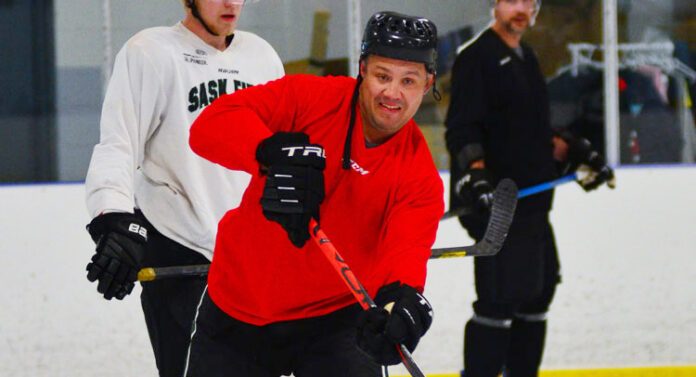 Little did Jon Mirasty know the first time he laced up a pair of skates it would one day lead to a potential career in television.

That’s exactly what appears to be the case, however, as the Flying Dust First Nation member and former pro hockey player was recently asked to appear on Shoresy, a spin-off to the popular comedy series Letterkenny.

“To be honest, a lot of people watch Letterkenny but I’m not much of a TV guy so I don’t really know what it’s all about,” Mirasty told Northern Pride. “But, I was offered a contract from the people at the TV show and I will be playing a character named Jim.”

Letterkenny, which debuted in 2016, is a Canadian sitcom that follows the residents of a fictional rural community in Ontario. In June of this year, production began on the show’s 10th and 11th seasons, while the spin-off, Shoresy, was also announced. Shoresy is slated to appear on Crave in the 2021-22 TV season and will focus on the character of Shoresy as he moves to northern Ontario to take a role with a struggling ‘AAA’ hockey team.

“I fly to Toronto Nov. 9,” Mirasty said. “And then drive about four hours to Sudbury, ON where the show will be filmed. I don’t know how exactly things will play out, but I will be there from Nov. 9 to possibly Dec. 20, and may have a chance to come home once or twice to visit on weekends.”

As for why he was invited to join the cast, Mirasty believes one of the behind-the-scenes people on Letterkenny must have followed his hockey career, including his tendency to get into fights with members of the opposing team.

“I think a lot of my role is going to be on the ice,” he added. “I don’t know too much detail yet, but I have been getting transcripts of the storyline.”

Mirasty went on to say the opportunity to appear on the show is an example of his hockey career opening new doors for him.

“I don’t know what’s going to happen, but it could lead to bigger and better things,” he said. “I’ve never acted in my life, but I believe in taking the opportunities given to you because you never know what it could lead to. It might turn out to be just a one-time experience, but maybe I will be really good at it and it might lead to something else. It’s something neat.”

Mirasty said other hockey players have also been invited to be on the show, including Jordan Nolan who played with Meadow Lake’s Dwight King as a member of the Los Angeles Kings.

“I’m just taking it a day at a time,” Mirasty continued. “Every day I’m receiving emails from different departments on the TV show. One day I’ll get the travel agency, another day I will get the hairdresser, it’s kind of a different experience having all these different people reaching out to prepare me for a TV show.”

“I always say, a child’s game of hockey led me to all these awesome opportunities in life,” he said “I didn’t get the opportunity to get a degree at university, but it was an education in itself to travel the world and meet so many different people. I’m nervous because I’ve never done anything like it, but it’s something I’m looking forward to. I was an entertainer on the ice, so it can’t be too much different.”