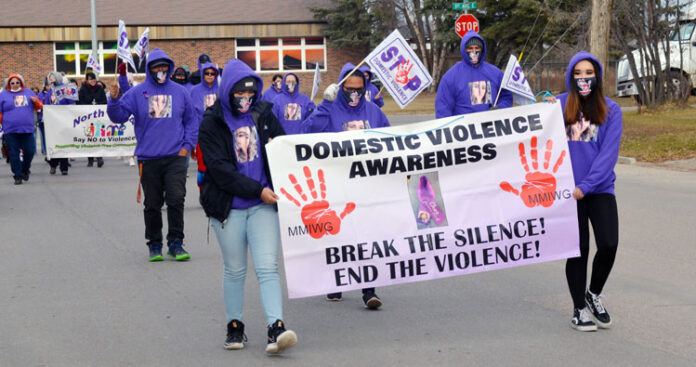 A Flying Dust family, along with more than 100 Meadow Lake and area community members, came together recently to shine a spotlight on an issue they say affects many but all too often goes unnoticed.

This “spotlight” came in the form of a domestic violence awareness walk Saturday (Oct. 30) in memory of Charlene Graham, the 34-year-old Flying Dust woman who lost her life Aug. 30 as part of a murder-suicide in Lions Park.

“Since it’s Domestic Violence Awareness Month, my mom, Mary Morin, and I decided to end this month with a walk in memory of my sister, Char,” explained Graham’s sister, Della Duquette. “It’s been tough to plan this event because what happened is still so fresh, but we decided to go with Oct. 30 because that was two months since she left us.”

Graham, a teacher and mother of two, died outside a camper-trailer in the Lions Park campground. Her estranged husband, Delane Graham, 34, from Thunderchild First Nation had been living in the campground since the couple split about a month prior. He was found dead by his own hand inside the same camper-trailer.

“It’s important to get the word out because, the way my sister left this world, well, that didn’t need to happen,” Duquette added. “My mom and I talked with each other, and decided to do it. When word got out, we received some help from FSIN. They have a program for murdered and missing Indigenous women and girls, and they helped us by paying for our hoodies and T-shirts.”

The shirts were given out to those who took part in the walk prior to the event.

“The shirts have a picture of (Charlene) – we designed them ourselves – and, seeing as they are located on our reserve, we got Snipe and Celly Pro Shop to make them for us,” Duquette continued. “We have had a lot of community partners, which means a lot. I have been struggling myself just to get through this. It’s difficult to carry on from that, but doing my best.”

Duquette was at the campground when the shooting occurred, and witnessed her sister’s murder firsthand.

“People around the world need to be made aware of the seriousness of domestic violence, and we want to prevent people from doing something like this to others,” she said. “It’s important to treat people how you want to be treated. The walk was to raise awareness and, hopefully, encourage others to get help for their mental health issues before things go too far.”

The walk began at the Meadow Lake RCMP detachment, proceeded south on 3rd Street East, down 7th Avenue to 5th Street West and then to Lions Park and the site of where the Aug. 30 incident occurred. Following a prayer, the participants headed to the PineRidge Ford Theatre in Lions Park where there were speeches, a catered meal and a song performed in her sister’s honour by Duquette.

Among those to also take part in the walk was Meadow Lake’s Renée Stevenot.

“Domestic violence is something that touches so many people’s lives and something I’m very passionate about, as I’ve had many friends and people I care about affected by it,” Stevenot said. “I didn’t know Char, but I do know a few of her family members and I showed up to support them. Charlene didn’t deserve to die how she did and her kids don’t deserve to grow up without their parents.”

Stevenot went on to say, when a person finds themselves in a situation where they feel hopeless, trapped, controlled or are concerned about the mental health of their partner, it is very difficult to reach out to anyone because they don’t always know where to start.

“If you feel alone or stuck, please reach out to someone you trust,” she said. “There are many people in our community who have years of experience helping families and women or men get out of a domestic violence situation/home. Sometimes it just takes having the courage to tell one person and they can get the ball rolling.”

She also said she felt it was important to walk with Duquette and her family.

“It was also an honour to share a tiny part in their grief over such an amazing young lady who still had so much life ahead of her,” she added. “Please reach out and let’s make sure Char’s life is never forgotten.”

“My sister’s life mattered, and she didn’t have to die because of violence,” she said. “Violence needs to stop.”