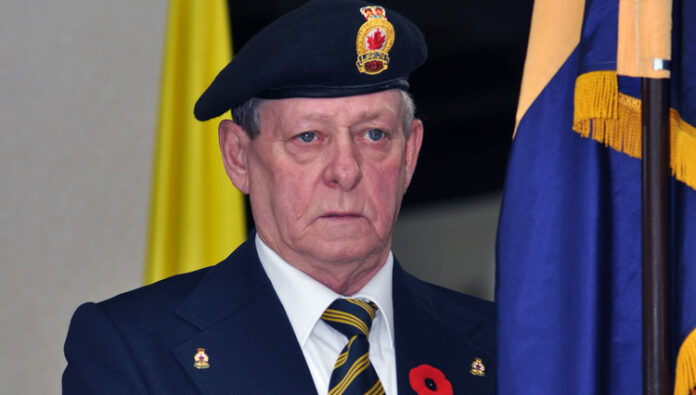 The heart and soul of Royal Canadian Legion Branch 76 in Meadow Lake is going to be hard, if not impossible, to replace.

This is according to Branch 76 president Joanne Carter when commenting on the recent passing of lifetime Legion member Barry Dallyn who died Oct. 31 after a lengthy illness. He was 73.

“Barry was tireless and generous,” Carter remarked. “Once he made a commitment, you could always count on him to do the heavy lifting and stay engaged until the work was done. He was a steadfast soldier and always on the front lines of serving the mandate and mission of the Legion.”

As a lifetime member, Mr. Dallyn – Carter added – donated his time, his money and effort to make sure he did his best to enshrine the legacy of Branch 76 as a flagship organization for the community. Throughout the years he held various positions within the Legion, but, according to friends and fellow Legion members, he was simply the “go-to guy” for pretty much anything and everything.

“He handled memberships at one time, served as the Legion’s sports director and, I believe, he was president for a bit,” stated Legion member Dennis Baldinus. “When there was work to do, he was always front and centre. If we had flooding issues or if we needed the place open for freight to be delivered, he was the guy you called. He did everything. Probably right up until last week he was still signing cheques. He remained heavily involved and, even though he was at home, he was still helping out.”

Carter went on to say she doesn’t even know how to begin to thank Mr. Dallyn for his many contributions to the local branch.

“He’s left a hole,” she noted. “When it comes to the physical stuff, yes, we’ll always find somebody to cut the grass, paint the building or whatever. It’s the heart and the passion which will be impossible to replace.”

Baldinus, who attended elementary school with Mr. Dallyn, said anybody could consider him not just a friend, but part of their family.

“He had that warm, fuzzy feeling with everybody,” Baldinus said. “People would just meet him on the street and he was full of life. Even right up until the end. Some people get bitter when they are hurting, but he just wanted everybody to be happy. He didn’t want anybody dwelling on his situation. He was very positive and it’s going to leave a huge hole in our operations. Barry was a cornerstone of the Legion.”

A celebration of life was held for Mr. Dallyn at the local Legion branch Wednesday afternoon (Nov. 3).

“He was always someone you could turn to, and now he’s not there anymore,” Baldinus said. “We’re grieving, as he was not just a Legion member, but an exceptional friend to all of us and we will all miss him dearly.”

Meanwhile, Branch 76 has announced its annual Remembrance Day service will once again take place at the Cenotaph outside the local branch Nov. 11.

“It is primarily for COVID reasons,” Carter explained. “We didn’t think people would be comfortable attending an indoor ceremony. There are still COVID concerns in our community.”

“We would far sooner have it indoors where people can be comfortable,” he said. “We usually would have a pretty big crowd show up, but COVID has definitely caused us to change things up. In the old days the service was held outside, but we’re getting old and we don’t handle the cold very well. For me, I fight through it because it’s something we still need to do.”