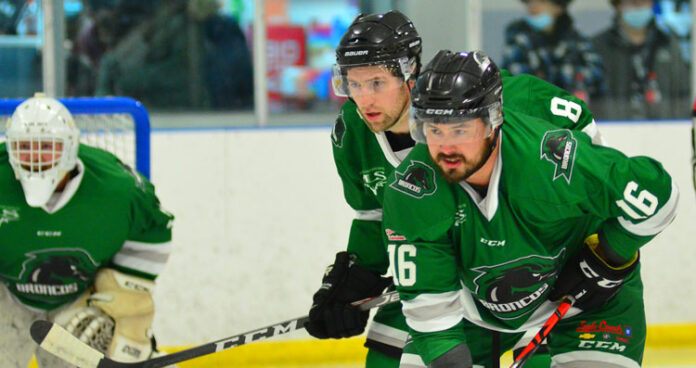 This statement came on the heels of back-to-back losses for the Meadow Lake Senior Broncos in their first two games of the 2021-22 SaskAlta Hockey League season.

“We lost the first period of our very first game 4-1,” Morin said with regard to Meadow Lake’s eventual 5-4 loss to the Lashburn Flyers Friday evening (Nov. 12). “We fought our way back to make it a 5-4 game, and I believe we got stronger as the game went on. We were just a little rusty in that first period – mental rust more than anything.”

Lashburn scored their first goal 25 seconds into the game, following it up with another goal at the 6:35 mark. Former NHLer Dwight King, meanwhile, earned the Broncos their first goal at 9:23, but Lashburn fired back with two more at 11:01 and 14:17.

The second period saw Broncos goals courtesy of Alex Vidal and King at 5:44 and 7:16 respectively with Lashburn’s fifth of the game coming at the 10:02 mark. In the third period, Broncos newcomer Shane Hounsell lit the lamp for Meadow Lake’s fourth and final goal.

Meanwhile, Morin said the Lashburn team, which this season also includes players from the former Hillmond Hitmen, will likely be a strong team to beat this season.
“They were a pretty good team we were playing,” he said. “They’re going to be someplace near the top at the end. It’s a combined Lashburn-Hillmond team, so they’re going to be a good measuring stick.”

“We were quite a bit better in the second game, but a few mental mistakes cost us the win in the end,” Morin said. “We were tired, and a little short of players yet.

When you have back-to-back games against such a good team and you start making mistakes because you’re tired, well, that’s going to cost you. Overall, though, it was a really good effort by the boys. We’ll get better.”

Jared Iron netted two goals for the Broncos that night, while single markers were earned by Hounsell and veteran Colby Stanley.

Morin also said it was pleasing to see such a strong crowd on hand for Saturday’s home game.

“I don’t know the numbers, but the stands looked pretty good – it was a very supportive crowd,” he said. “It was an especially good crowd considering the late, 9:30 p.m. start time.”

As the weeks go on, Morin also expects more Broncos players to be available.

“We lose quite a few players to outfitting at this time of year,” he said. “Everyone is also really busy late in the year.”

Next up, the Broncos will be in action at home this Friday (Nov. 19) against Paradise Hill. The puck drops at 8:30 p.m. From there, the team hits the road for another encounter with Paradise Hill this Saturday (Nov. 20).

“It’s going to get better as we go along here,” he said. “Once we get in the groove again, we’ll be good.”