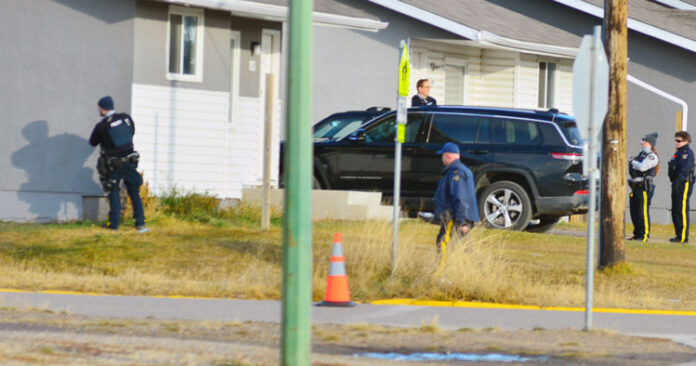 On Nov. 8 at approximately 1 p.m., Meadow Lake RCMP received a report of an adult female being held against her will by armed individuals at a residence on the 500 block of 7th Avenue West in Meadow Lake.

When police arrived at the residence, the occupants refused to let them in and barricaded themselves inside. Officers confirmed a female was being forced to remain in the residence.

Meanwhile, as a precaution, five nearby schools enacted their hold-and-secure procedures while the incident unfolded and, with the assistance of multiple Saskatchewan RCMP units, police entered the residence just after 4 p.m. and safely removed the female. She was not injured.

“This was a dangerous situation, but we were able to quickly gather the specialized Saskatchewan RCMP resources necessary to rescue the female from harm’s way,” remarked Sgt. Stephen Hurst of the Meadow Lake RCMP. “I realize the anxiety caused by a large police presence in the city and the hold-and-secures at the schools, and I thank the public for following directions and giving us the space needed to safely resolve this incident.”

All three men were also arrested on outstanding warrants. They made their first court appearance Nov. 10 and will next appear Nov. 15 in Meadow Lake provincial court.

Meanwhile, during the hold-and-secure, school activity proceeded as normal within the schools, and Northwest School Division director of education Duane Hauk said students and staff were safe.

“In many cases, students may not have even been aware the school was in hold and secure,” he added. “Our staff do an excellent job prioritizing student safety without creating a panic.”

Prior to student dismissal at the end of the day, RCMP provided instructions to staff about which area of the community students were to avoid, while staff contacted families of students who live in the area to arrange for pickup. School buses ran as normal.

“In any emergency, the safety of our students and staff is our top priority,” Hauk continued.