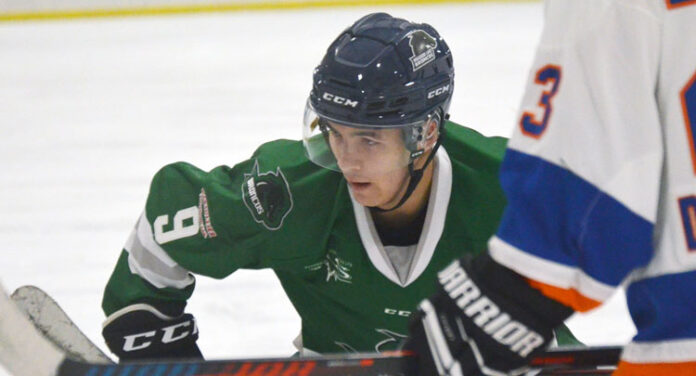 The Meadow Lake Senior Broncos finally have one in the win column.

The Broncos beat the St. Walburg Eagles 6-3 Friday night (Nov. 26) in St. Walburg, but the victory celebration was short-lived as the Eagles soared back to the top Saturday (Nov. 27) to notch a 7-2 victory over the Broncos at PineRidge Ford Place on Flying Dust First Nation.

“In Friday’s game, I felt we played very well for the first two periods,” remarked Broncos assistant coach Brent Dubray. “We forechecked well and kept them to the outside for the most part. But, in the third period because we had a lead, I felt we sat back and let them come at us, and, hence, the 6-3 final.”

Dubray went on to say this laid back approach carried over into Saturday’s home game.

“I don’t feel we kept them to the outside as much as we should have, and we didn’t forecheck as well as we can,” he said. “We have a really good skating club, but if you’re not skating with a purpose, it matters not how well you skate.”

Still, Dubray is pleased the team finally secured its first win of the season.

“We know we have a decent team,” he said. “We have a few issues we need to clean up from playing two years of rec. hockey and understand we’re back into contact hockey. It will take a little bit to clean that up from our perspective, and once we do I am not worried much about our team. We have a lot of good skaters and good hockey players who also don’t like losing.”

The weekend’s games also saw the return of Flying Dust’s Jon Mirasty who was home from Ontario for a few days during a break from shooting the new television series Shoresy. Mirasty had the opportunity to play alongside his son, Triston, a newcomer to the Broncos’ roster this season.

“Jon is a pretty protective father,” Dubray said of the elder Mirasty’s efforts to come to his son’s aid when the latter was targeted by a St. Walburg player late in the second period Saturday night. “It’s good to have Jon around, generally as a member of the team because of the confidence he exudes is contagious. He keeps it loose with the guys and is a very good leader that way. The downside is, he did take a four-minute penalty when Triston got hit.”

Dubray, however, said any member of the team would have done the same.

“If somebody hits any of our guys dirty, one of our guys will go there and talk to him or do something,” he noted. “We want to stand up for each other, but we want to do it in a smart way as well. In this case, we did kill the penalty off, although St. Walburg did score shortly thereafter so perhaps it played our guys out a little bit.”

Although Saturday’s game resulted in a 7-2 win for the Eagles, Meadow Lake outshot their opponents 51-35.

“Their goalie, Bryan Bridges, is very good,” Dubray said. “With Bridges, if you don’t take his eyes away, he’s going to stop the puck. The two goals we did score, he didn’t see either one of them. You can shoot 51 shots at a goalie like Bridges and he will stop 51 of them if he sees them.”

As for the younger Mirasty, he was not disappointed with the outcome of Saturday’s game. He’s simply happy to be part of the team.

“It’s nice to play alongside my dad, as well as some of the other guys I’ve watched since I was 10 years old,” Mirasty said.

Prior to joining the Broncos, Mirasty was playing hockey in Fresno, California.

“I decided to stay home and work for the year before going to university next year,” he said. “I’m working at the OSB mill and, while I’m not sure if I will be playing hockey, I am planning to go to the U of S next year.”

This Friday, the Broncos are in Hillmond to take on the always tough Hitmen with a return game set for Saturday at Flying Dust. Game time is 8:30 p.m.

“We see improvements in our team with every game,” Dubray said. “We just haven’t played a full 60 minutes yet.”